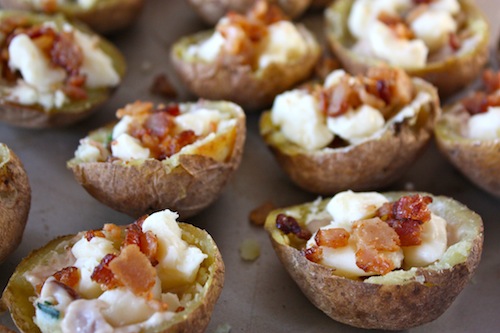 At Endless Simmer we’re a little obsessed with all thing poutine. We eat it for breakfast, lunch and dinner. We haven’t figured out how to turn it into a dessert just yet (any ideas??) but breaking news…we now have poutine as a handheld appetizer.

The idea for poutine potato skins came when I saw that Mile End — the champion of our tour de poutine — was offering these as a take-out Super Bowl snack. I made my version for Super Sunday as well, but I’m pretty sure they make sense for March Madness, too. Or St. Patrick’s Day. Or Easter Sunday. Or a random Monday morning.

These aren’t actually so different from regular potato skins; you’ve just got to pair the spuds with gravy and cheese curds, the other two elements of the holy trinity that make up poutine. The biggest hurdle, of course, is finding fresh cheese curds. In New York, I tracked them down at Saxelby Cheesemongers. For the gravy, I decided to go a little more American than the dark gravy usually found on Montreal poutine, and went with a white bacon gravy. Since I had to cook up bacon strips to produce that gravy, in the end I crumbled them up and added that to the top of the skins as well, because…yeah, I don’t have to explain myself there.

1. Bake up the potatoes of your choice. Russet are generally the best for baking, but I used these nice little new potatoes I found at the farmar (at 350 for 45 minutes), because I wanted my skins to be handheld-sized.

2. Make your gravy. I followed Hillbilly Housewife’s recipe for bacon gravy; I’m sure a darker, fowl-based gravy would work well here, too.

3. Let the potatoes cool. Carefully scoop out most of the innards, leaving about a quarter-inch of spud in each skin. Mash the removed potato innards together with a scoop of cream cheese and some chopped chives. Spread a small scoop of the mashed potato mixture back onto each skin. (You’ll end up with plenty of leftover mashed potatoes — won’t be bad fried up with an egg in the morning).

4. Add a spoonful of gravy to each skin, then 2-3 cheese curds, and crumbled bacon, if desired (most likely desired).

Ideally, you want to be able to serve these right away. They reheat up fine, but the cheese curds will melt together and lose a little of their squeak, one of the main components of a good poutine.