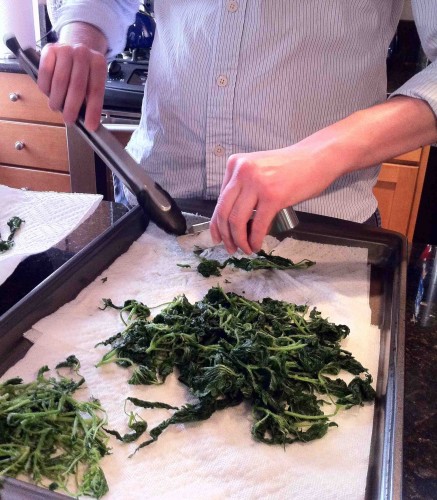 Growing up in England nettles were a large part of my childhood, whether I liked it or not — and I generally didn’t. This wretched plant caused many a tear in my household, its stinging leaves leaving immense pain that lasted for hours, with little sympathy from my parents as I was usually up to no good in the garden or local park, causing said sting.

When I saw nettles at the local farmers’ market here in D.C., I jumped at the chance to fight back, to serve justice to this leafy plant once and for all. There’s very little you can actually do with nettles, the most obvious was soup, but in these late spring months it seemed a tad too warm for that. I settled on pesto, a simple and versatile sauce that I could use in many dishes.

If you buy nettles you will probably do so in a sealed bag, the leaves are covered in mini hairs that release a sting upon touch. To kill off the sting I blanched the nettles in a pot of boiling water for a minute or so, then drained them on paper towels to soak up the excess water. Despite knowing I had killed off the sting by boiling the leaves I still used kitchen tongues to rip the leaves from the stems. I’m a wimp, I know.

For the pesto I used as follows: 2 cups of nettle leaves, 1/2 a cup of olive oil, 2/3 cup toasted walnuts (I refuse to pay the ridiculous price for pine nuts), 1/2 cup parmesan cheese and a pinch of s&p. Blend until a you get a paste, add a little more olive oil should it be too thick.

I spread the pesto on a slice of ciabatta, topped with tomato and grilled chicken for a light summer evening dinner.