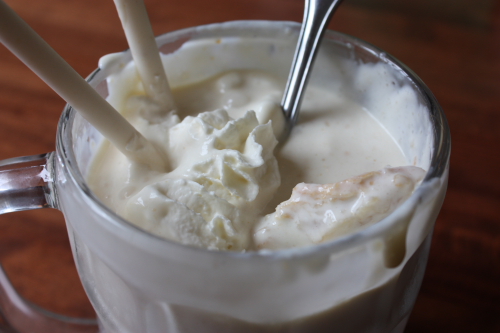 Walking through the NoPa neighborhood of San Francisco recently, the veggie gf and I stumbled upon a restaurant with a name so simple and enticing we couldn’t resist: chile pies (& ice cream). Yep, that’s the name of the restaurant. And they have just three basic menu items:

– Classic New Mexico-style frito pie (for the uninformed, that’s chili poured over a bed of fritos).

– Fresh slices of sweet&savory pie with outrageous varieties such as green chile apple pie with walnuts and a cheddar crust.

– Ice cream and frozen yogurt in creative flavors like bittersweet chocolate and horchata.

Obviously, this was already approaching a pretty perfect restaurant as far as I’m concerned. But then I scanned to the bottom of the menu and saw one more item that just about knocked me over…

Pie Shakes. “Just choose your slice of pie and flavor of ice cream.” Ummmm…say what?

Server: We take a slice of pie and a scoop of ice cream and make it into a milkshake.

BS: Wait, like, you really chop up the pie and put it in a milkshake?

BS: Did you guys make this up or is it a thing?

Server: No, I’m pretty sure we made it up.

BS: So is it smooth like a milkshake or chunky with pieces of pie?

Server: It really depends on who is making it.

Stunned, I was unsure whether to be more wowed or disgusted. For the moment, the green chili pie looked too perfect — we had to try it as is, sans shake. But I knew immediately that I would have to return before we left SF and try the pie shake.

When we made our way back to chili pies (& ice cream) a few weeks later, I knew what I had to do. I asked the server on hand which of their fresh pies would make the best shake, and we settled on a lemon-buttermilk pie mixed with vanilla-cookie ice cream.

A good ten minutes of mixing later and she returned with the work of beauty you see above. I was concerned about what type of texture the pie shake would entail — would it just be a grainy milkshake with no attractive vestiges of pie? Or more like a runny scoop of ice cream with a soggy slice of pie on the bottom?

But it was exactly what was promised — the perfect fusion of god’s two great dessert creations, every bite/sip tasting a little bit like pie, a little bit like ice cream. Most of the shake was drinkable through a straw (with a little neck effort), while some large pieces of crust remained whole and crispy.

I think the USDA recommended allowance of pie shakes is once in a lifetime, but still — why not?