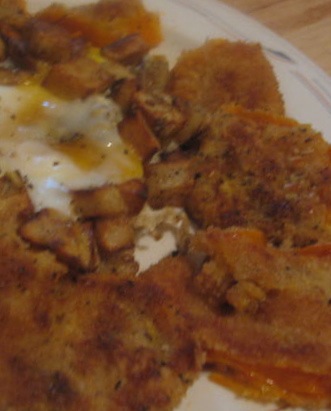 We must be nearing the end of summer, because the food co-op just got in their first batch of beautiful golden heirloom tomatoes. I won’t insert myself into the whole debate about what makes something an heirloom or not, but I clearly had to grab one of these lovely yellow guys, even though it wasn’t quite ripe yet.

I got home and sliced it open, and as I expected, it was nice and sweet but still a little too tart. So I decided to take a stab at breading and frying it up, a la fried green tomatoes, which brought out even more sweetness and made it, well, deliciously breaded and fried, of course.

Not-quite-following the Southern tradition of buttermilk and corn meal fried veggies, I went with egg and panko for a lighter (ha) dish. It worked well with my semi-ripe yellow heirloom, but I think you could go for any tomato, as long as it isn’t so ripe and juicy that it will fall apart in the process.

– Slice the tomato thin, pat it with a paper towel and salt the slice to get rid or some of the liquidity.

– Beat one egg in a bowl and spread out some panko breadcrumbs on a plate. I mixed the panko with a handful of pine nuts (thanks for the great idea, Chris) and some dried basil.

– Dip the tomato slices in the egg and then the panko mixture until they are covered. The breadcrumbs won’t really take to the skin sides, but this is OK because it leaves a little sliver of color to reveal the cooked tomatoes underneath the bready goodness.

– Fry ’em up over low heat, in a little canola oil, for about five minutes per side.

Meanwhile, I fried up a potato to eat with it. My go-to side dish, I usually just fry up the potato cubes with salt, pepper, and paprika. But gansie had me seriously craving some egg yolk, so when the potatoes were just turning golden, I added the bit of beaten egg that I had leftover from the tomato breading process. This held the potatoes together in a simple frittata-like fashion. Then I cracked a fresh egg in the center of the tomatoes, covered the pan and let it simmer together for about five minutes. It all held together loosely, enough that it could be plated as one entity, a circle of eggy potatoes with the whole fried egg on top.