Forget who piles pastrami highest or fits the most varieties of cold cuts onto one hero roll. A great sandwich has come to mean more than just bigger, better and meatier. Across the country, a new breed of sandwich artisans are taking lunchtime to a whole ‘nother level. From California to New England, here are Endless Simmer’s top ten favorite new sandwiches. 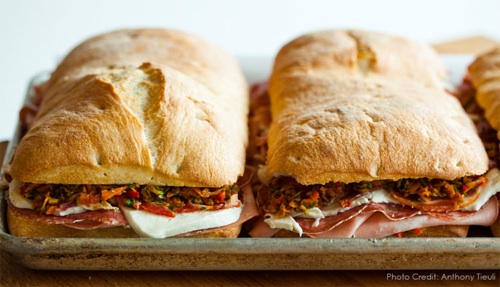 Spuckie is a term used by old-school Bostonians to identify any sub sandwich, but it’s increasingly associated with this year-old Brookline shop. It’s also probably the one sandwich that most successfully merges the old-school method of overdoing it on Italian meats with the new world of artisan, veggie-centric goodness. Super-thin slices of fennel salami, hot capicola and mortadella are layered on an oversize ciabatta, then topped with gooey, hand-pulled mozzarella and a fresh olive-carrot salad. For even less traditional sandwich-lovers, there’s also an eggplant spuckie available. 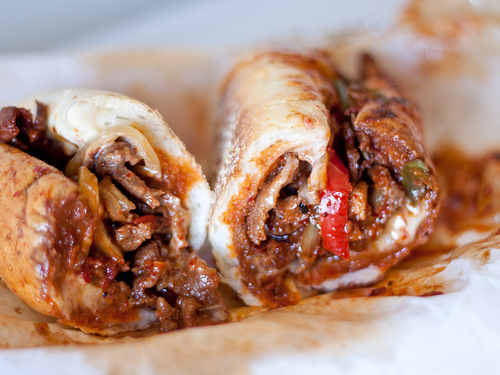 At the risk of outraging an entire city, we’re going to say it: the Philly cheesesteak is boring. With no disrespect meant to the age-old art of slathering fake cheese on top of a mound of meat, we just think this is one classic sandwich that is ready for a creative update. Enter University City sandwich truck Koja, where the chewy cheesesteak meat is replaced with bulgogi, Korea’s signature thinly-sliced, spicy BBQ beef. It’s served on a hoagie roll that’s coated in sweet chili oil and accented by sauteed peppers and onions. Koja also offers bulgogi pork and bulgogi chicken variations, but the best part is the unbelievable price — $3. Read more about this amazing sandwich at My Inner Fatty. 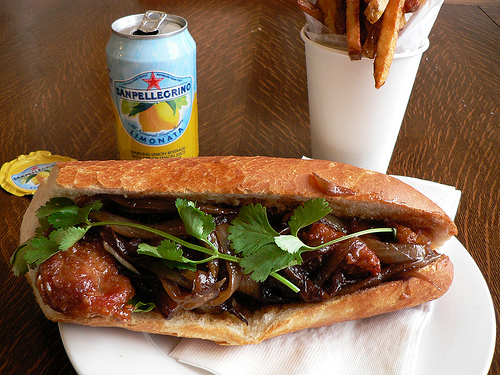 Have you ever dug into a steamy styrofoam container of General Tso’s chicken and thought, “this is delicious, but it would be even tastier on a bun?” Of course you haven’t, that’s the most insane thing we’ve ever heard. But crazy is sometimes genius, as is proven at this tiny Seattle sandwich shop, where hunks of tender chicken are deep-fried and glazed in a tangy brown sauce, then served on a crispy baguette with caramelized onions and cilantro. The result is a supremely sticky, but utterly satisfying sandwich. (Photo: Sevius)

Another new West Coast outpost that achieves genius results by thinking outside the bun, LA’s great cheese-on-wheels purveyor offers several list-worthy grilled sandwiches, but none is more awe-inspiring than this. Sharp cheddar mac-and-cheese, strands of sweet BBQ pork and caramelized onions are all stuffed into two perfectly buttered-and-fried slices of white bread. Yes, it sounds like the horrifying 3 a.m. creation of a stoned college student. Yes, it actually works.
(Photo:
Grilled Cheese Truck) 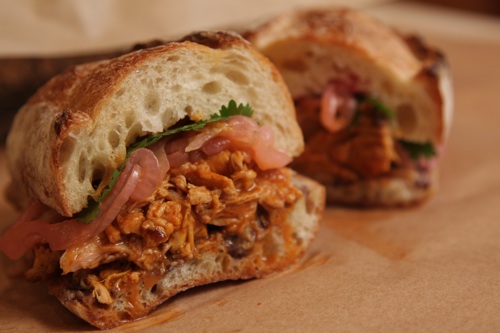 Upgrading Mexican street food has suddenly become a hot task of haute chefs around the nation, although the results often have us pining for the real thing. Not so at Rick Bayless’ Chicago sandwich shop, where tortas baked in the wood-burning oven take Mexican to levels we didn’t know existed. In this sandwich, silky strands of roasted suckling pig are served on crusty bread spread with black beans and achiote paste, then finished with a layer of pickled onions and habanero salsa. The Pibil may be one extra ingredient away from being a Top Chef disaster story, but as is, it’s perfection on bread.

Artsy Photo of the Day 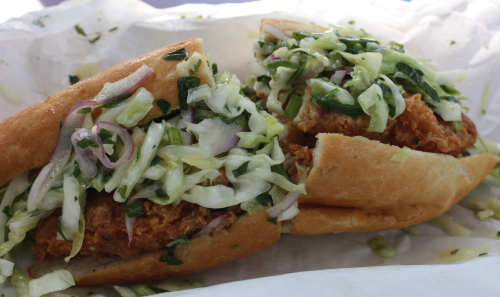 From Bakesale Betty in Oakland, CA — the sandwich that puts the McChicken to shame.

PS — your humble ES editor is exploring San Francisco, Oakland and surrounds this month — mostly with my mouth, of course. Where to eat? Shout it out, ESers!

Update: Officially one of the ten best sandwiches in America.