Two Broke Girls With One Contradiction 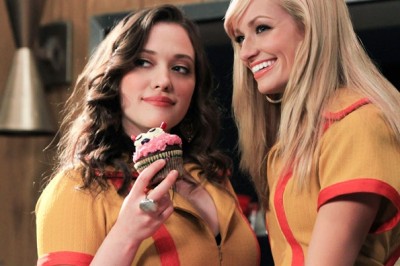 I live in DC, where the people are nerdy and we still form lines at cupcake shops. We’re dorky. Okay. I admit it. But I also live among the smug and deceptively pretentious. I’ve been to Brooklyn, too. I’m familiar with stereotypes. Therefore, let me judge.

In the new CBS laugh-tracked comedy, 2 Broke Girls, a sarcastic bitchy brunette, “Max,” played by Kat Dennings, is poor and full of sass, living in the birthplace of hipsterville, Williamsburg, yet dreams of opening a cupcake store.

Max isn’t a hipster herself, as she easily mocks two wool-hat wearing scrawny boys, but she sure isn’t subscribing to Real Simple either. Heeding information solely from the inaugural episode, I concur that the too-cool Max should be too-cool for the tired cupcake hysteria, making 2 Broke Girls a new sitcom with an already faulty old-trend.