The Thyming Is Never Right 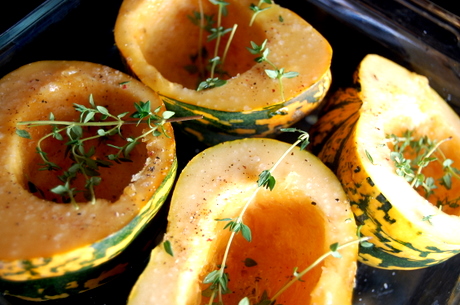 I tried. I really tried. I even got 80P into the mix. I pulled out a few cookbooks and was willing to follow a recipe. And I hate following recipes. I even *encouraged* 80 to flip through two cookbooks. But I found nothing. 80 found nothing.

I appreciate the idea of cookbooks, the look of printed recipes and accompanying photos and the feel of turning pages. But they just don’t have that search engine capability. Sure, I can look up brussels sprouts in the index but the act of searching doesn’t force an answer. And how many cookbooks can I scan before I turn to google?

Cookbooks become useful in the pre-meditation stage, not in the I have coconut milk, frozen spinach and black beans in my kitchen – what to do after stage. So I abandoned my full shelf of cook books and headed into the kitchen with a scant plan.

Butter and Squash Puree with Noodles

I sliced the squash in half length-wise, scooped out the seeds and pulp, rubbed the flesh with oil, salt and pepper. Now, I’m not sure if this infused any real flavor, but I scattered a few thyme sprigs in the well of the squash halves. Plus, it looks, pretty, no?

For some reason my oven has a hard time penetrating winter squashes. I left that sucker in a 450 degree oven for over an hour and it still wasn’t all that soft. But after a while I gave up on roasting and starting scraping out the flesh. I really wanted to reuse the shells as a bowl, but when fighting with the squash to release from the skin, the skin tore so I gave up on that idea. And for the scraping device, as always, I used a serrated grapefruit spoon.

While the squash was roasting, I started to cook a quarter of an onion and two large garlic cloves in some oil. Actually, first I let the oil heat up with thyme and then added the chopped onion and garlic. If you couldn’t tell, I tried my hardest to create a thyme flavored dish.

The mostly cooked through squash then got immersion-blended with the garlic and onion, plus almost half a stick of butter and salt and pepper. The puree still remained very thick and would probably be better used in other pasta dishes—shells, lasagna, ravioli—but that wasn’t going to fly on a non pre-shopping night.

I didn’t drain the pasta–long, flat fettuccine like noodles, but transferred them directly from the water to the puree with that claw type device.  I even added in extra pasta water to thin out the puree, and stirred to incorporate. I also grated in parm cheese. Once served, I topped the pasta with extra butter, cheese, black pepper and thyme.