What to Do with That Leftover Easter Candy 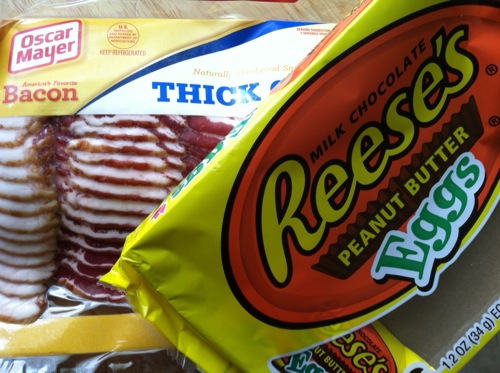 On Saturday morning, in my pajamas, I impulse-bought two pounds of coffee, two pounds of bacon, and a package of Reeses’s Peanut Butter Eggs.

I just moved, so this was the entire contents of my fridge, besides a case of beer (obviously). I realized I had no idea what I was going to do with six peanut butter eggs and all that bacon, so one of my friends tweeted that I should combine the bacon, coffee, and chocolate….and my new favorite bacon and eggs were born. I left out the coffee because…well…I just did. The suggestion may have been a joke, but I’m pretty sure these peanut butter bacon strips are going to be the next big thing. Or at least replace bacon & eggs in my house. 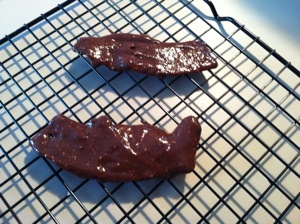 4 strips thick-cut bacon, cut in half for dipping (thin bacon won’t work, it has to be as thick as possible for the best bacon ratio)
2 Reese’s Peanut Butter Eggs
Half and Half
Chocolate candy coating (chocolate chips will work too, but won’t get as hard)

Cook bacon until crisp (I chose to fry mine in a cast iron pan).

While the bacon is cooling, melt the eggs in a small, shallow pan over low heat. Add additional chocolate and half and half until the mixture is thin. If it looks like it’s starting to get grainy or burn, remove it from the heat immediately!!! In my experience, if the melted chocolate is too hot to touch comfortably, it’s going to burn soon.

Using a fork (or your hand), quickly dip the bacon into the chocolate-egg mixture, making sure you let any excess run off. The bacon:chocolate ratio is REALLY important here. If the mixture is too thick or if the bacon is too thin, you won’t taste the bacon.

Place on cooling racks and wait as long as you can before consuming (me: about 7 minutes).