Sushi Takes Over the World

Why does sushi only come from Asia? Cultures all across the globe each developed their own varieties of noodles, sandwiches, sausages and stews. But only people in one corner of the world ever thought to roll all of their ingredients into one beautiful bite-sized piece. Until now. At Miya’s Sushi in New Haven, Connecticut, chef Bun Lai explores what the world might taste like if everyone made sushi.

Bun took over the kitchen at Miya’s a few years ago from his mother, who had already built a loyal local following for her traditional Japanese sushi rolls. But instead of sticking with the formula, he transformed Miya’s into what is almost certainly America’s most inventive sushi restaurant. He eschews traditional, overfished sushi ingredients like bluefin tuna, red snapper and unagi, instead focusing on sustainable species like bonito tuna and catfish, and incorporates them into a wide variety of inventive rolls listed on a magazine-sized menu that comes complete with historical footnotes and detailed eating instructions.

In the roll pictured above, Bun explores what it might have been like if sushi came from, say, north Africa. The roll encompasses ingredients found in Ethiopia: a tempura of rare tuna, goat cheese, flying fish caviar, apricots, avocado, pickled radish and a Berbere spice mix, all wrapped in a thin, housemade teff grain flatbread. Biting into it is like playing mindgames with your tongue — it has the texture and proportions of sushi exactly right, but with ingredients that just aren’t supposed to be there. If you can get past that, it also happens to be delicious.

And what would sushi taste like if it came from Guadalajara or Georgia? Keep reading…

Inspired by the mole poblano that the mothers of his Mexican sous chefs routinely send up north, Bun created a sushi roll that mimics mole’s complex sweet-and-spicy flavor. His playful sauce incorporates strawberries, bananas, chocolate, ancho chilies, pumpkin seeds and Oreos, and is slathered over a roll of shrimp, avocado and cream cheese, topped by a tender slice of teriyaki sunfish. 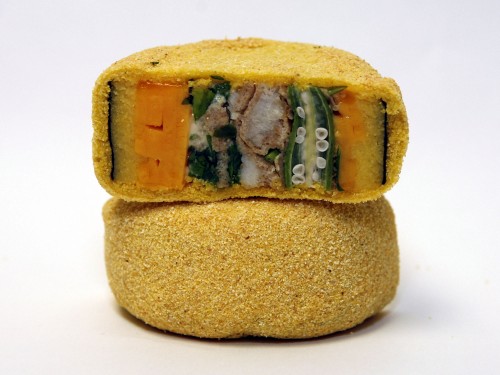 “The Greatest Sushi South of the Mason-Dixon” — fried catfish, okra, grits, cheddar cheese, spring onions and parsley — all wrapped in cornmeal and fried as crispy as a green tomato.

The Kanibaba roll brings the haute sushi treatment to an Applebee’s standby. Potato skins take the place of seaweed and are wrapped around jumbo soft-shell crabs, then topped with toasted havarti cheese and lemon dill sauce. Crawling around the rolls are fried Asian shore crabs, dime-sized predators that somehow made their way to New England and became the bane of local fishermen because they eat up shellfish larvae. Bun takes them off their hands and serves them here — you pick the crispy crabs up and pop them into your mouth whole.

Moving on to the great white north, Miya’s Sakura Sashimi is inspired by the way Inuit people eat frozen raw fish in wintertime. Tilapia sashimi is sliced super-thin, marinated in fresh beet pulp and frozen. The result is an icy slab of beet-flavored sashimi that melts on your tongue.

To wash it all down — sake infused with flavors like Cherokee sumac, foraged pine needles and Chinese chili peppers.

While some of the concepts might sound kitschy, they’re all executed perfectly. These aren’t gimmicky “sushi” rolls. Each bite actually tastes the way sushi is supposed to taste — a quality slab of seafood subtly accented by its supporting ingredients — only with flavors you’ve never tasted in rolled form.

Miya’s proves that sushi doesn’t have to be Japanese after all. It also has the honor of being the first restaurant ES heartily recommends as well worth a drive to Connecticut.