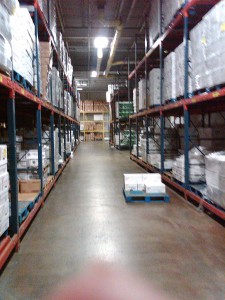 Editor’s Note: As you may remember, ES contributor forkitude has given up the corporate life to take the plunge into culinary school.

Part of culinary education is learning how to purchase food. Therefore, I found myself in a food Home Depot during my walking tour of the 245,000-square-foot Sysco warehouse in Lincoln, NE.

When did food distribution become so mechanized and industrial?

Sysco was started in the 1970s by several producers in order to distribute different food stuffs to buyers on the same truck. This idea has evolved into a food machine. And it felt like a machine.

In a presentation after the tour, someone brought up local and organic issues. As it was explained, they “try” to buy local, but unfortunately this is a litigious society. Sysco requires their producers to carry at least $4 million in insurance (perhaps not feasible for a small farmer). So, Sysco doesn’t have to worry monetarily if there is an E.Coli outbreak in the spinach they are distributing because they will be able to refund their customers with the insurance proceeds. In the end, it’s about money. Everyone’s ass is covered. Except the people eating this terrible food.

Oh and as for organic food: there is little demand for organic produc’s “Here in the Midwest…that’s mostly on the coasts.”

In speaking to a group of culinary students (re: future chefs and restaurant owners), the argument was made that if your restaurant door swings open twenty times a day, that is a bad thing. Picture a bad infomercial at 3 am: an angry old lady fussing with 3,000 tangled wire hangers in her closet until she finally discovers the Hanger Cascader and life is immediately wonderful. One truck, one delivery, one invoice, all of your food.

My question to the executive was related to the consolidation and monopolization of the meat industry since it was mentioned that “beef is plentiful here and it’s pretty good.” I wanted to know if customers in recent years have been asking about where their meat is coming from and if they are concerned with quality.

Answer? When you have fewer producers, you drive down sales. Economies of scale. No, they don’t hear anything from customers about concerns in the meat industry.

And for lunch? Pork chops served with a special “jumbo sized” asparagus developed by Sysco to be just as tender as thinner asparagus. Thanks, but no thanks.

When did we become so disconnected from our food?