Well.  Fall is basically here, guys. Football season just started, so it’s time to bring on the bevy of snack and appetizer recipes.

Instead of having you heat up some deep fried frozen snacks for your guests, I thought I’d bring you some super simple sinless snack options (try saying that five times fast). That way you can cheer on your team with delicious treats while maintaining your figure. Skinny snacks, for the win!!!

This one is soooo good.  I recommend making a double batch because this will be gobbled up by family and friends. You will be the hit of all football (or any other type of) gatherings! 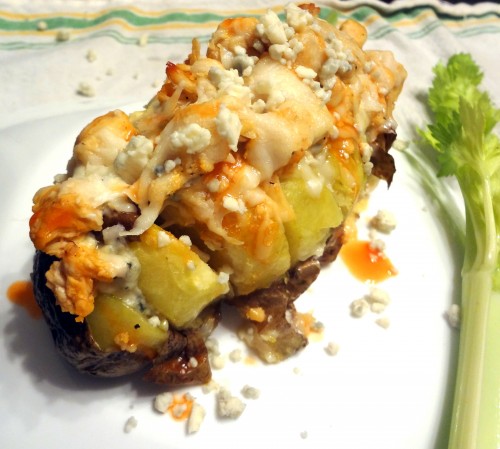 Is there anything more perfect than a potato?

Or a potato covered in spicy buffalo chicken and tangy blue cheese.

So, I took the idea of a Hasselback potato and made it quickly, because I have no patience for baking a potato in the oven.  I will sit cross-legged on the floor looking through the tiny oven window going, “C’mooooonnn, I am ready for a potatoooooo!”  Did I mention I’m a whiner?  Don’t you want to be friends, now?

So, I microwaved it.  And you can too!  Provided you have a microwave…if you don’t, I’m sorry.  Looks like it is oven viewing-time for you.  Or you could have some patience and find something else to do while it bakes.  I’m not that strong.

Portland is no stranger to meaty, overstuffed sandwiches (see Big Ass), but what do these crazy folks eat for breakfast?

Thankfully, the same thing. From the Brunch Box Food Cart, the Black and Bleu breakfast sandwich: two thick slices of Texas Toast stuffed with sausage, bacon, grilled onions and Cajun spices. Oh, and obviously they had to do something outrageously foodie here, so there’s a thick layer of bleu cheese spread across the bottom slice of toast. Love it. Who says you can’t get funky at breakfast?

Also on The Endless Road Trip: Portland
1. Porklandia
2. All That’s Euro is Not Trash
3. Salt and Straw

Cocktail O’Clock: Antipasto in a Glass

What’s better than a martini? A martini with prosciutto and bleu cheese stuffed olives.

The younger, hipper cousin to the Fancy Food Show, the annual Food Fete is a gathering place for foodie types; a showcase of the newest products across the world of cooking, dining and drinking; and an all-around schwagfest. Obviously, we bit. Here are the coolest new products we spotted at this year’s fete.

Remember last year when I got high on Top Chef and bought that Thomas Keller sous vide cookbook but then realized you need a couple grand worth of equipment to sous vide food at home? Well some clever market researcher must have realized there are a lot of d-bags like me out there, because SousVide Supreme now has an at-home sous vide machine designed for the average joe. OK, at $450 maybe it’s for the slightly above-average joe, but still, getting closer! Everyone must sous vide! UPDATE: Endless Simmer tries out and reviews the SousVide Supreme.

Ya’ll know we don’t usually hype pre-packaged sauces and such here at ES, but when the supermarket starts carrying roasted veal stock reduction, I have to digress from the norm. Yes, yes, I can hear Anthony Bourdain carping on about how every cook should have their own homemade veal stock in the freezer and how it only takes 172 hours to prepare so what’s your goddamn problem? Well you know what? I’ve had your book on my shelf for two years and still never made any damn homemade demi-glace, so I’m going with this. In stores this fall.

I think Lucini was actually there to show off the taste of their olive oil, but I was more impressed by the packaging. I don’t know about you all, but I’ve always found those tiny 6-oz. jars of oil woefully inept at keeping up with my usage, and the large bottles too heavy to lug home from the grocery store. Solution: an ungodly amount of extra-virgin olive oil, packed into a plastic bag in a cardboard box. It even comes with a spiggot, just like boxed wine! All I need now is the self-control not to drink directly from the spout.

This is a tasty green product that I’ve never seen in stores before. California-based Christopher Ranch is expanding their garlic repertoire by harvesting the stuff while it’s still young and green, and selling it with the leafy, scallion-like stalks attached. The green part of the garlic offers a less intense garlick-y bite, and you can still use the bulb, or even fry up those little strands at the root and sprinkle them on top of a dish. Coming soon to a Fairway or Whole Foods near you. Downside: shipped across the country in plastic packaging — I’d rather see them at the far mar.