In an effort to bring some class and sophistication to Endless Simmer (it is possible) I decided to host a High Tea for some of our DC food friends. High Tea is somewhat of an institution in my homeland of Britannia, but here in DC there are some pretty excellent high teas, and apparently it’s going a little underground over in London. My good friend Lucy who lives in London is well versed in organizing tea parties, so I hit her up for some tips on throwing one. Lucy says there are six rules to high tea:

Well…keep reading for my interpretation.

Like most of us here, I’m no baker and don’t particularly enjoy the restrictions it brings. Exact measurements are not my thing. I like to experiment with ingredients, which is why I leave desserts alone. But, the purchase of a new Kitchen Aid mixer has propelled me into this unknown world, for my first true (not from a box) baking experience.

On a recent Sunday afternoon I was sitting at the bar of Café Atlántico when I came across kumquats soaking in St. Germain elderflower liquor.  Coincidentally, later in the day I spotted some kumquats at Whole Foods, which is a rarity. It was one of those situations where you never hear or see anything for a long time and then it all comes at once. I love those moments so I bought two quarts of the fruit, not having any idea what I was going to do with them until the walk home.

How cute is she! Madeline is my friend Debbie’s daughter. And she happens to be allergic to peanuts.

I don’t know much about this phenomenon. When I was little I can’t think of one friend that had this peculiar intolerance. But recently, my mom has at least one child with this allergy in her nursery school class every year. And more than 3 million people have this same allergy.

Sometimes it’s really serious—the child can’t even be in the same room as a peanut. Others simply can’t ingest a peanut. But they also can’t even eat non-peanut food (for instance a Hershey’s chocolate bar) simply because it has been in the same processing plant as peanut filled food (although I think some of the big manufacturing companies now operate peanut free facilities.) Parents, teachers and other adults in their life have to be incredibly vigilant with this allergy and be trained to use a life-saving EpiPen in case of an attack.

But all this no-nut business doesn’t mean there aren’t tons of treats available. Deb’s always finding ways to entertain her kids (I particularly admire their interest in nail polish and lip gloss) but this creative and fun dessert made me wish for the days of carefree sugar indulgence.

In continuing with our back to school coverage, here’s an awesome way to get the kids in the kitchen after a hard day at school. 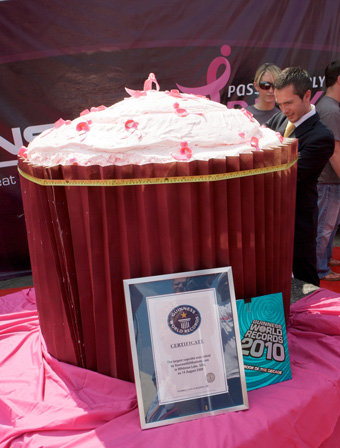 Feast your eyes upon this – the new “WORLD’S LARGEST CUPCAKE!” This 1200-plus pound cupcake made its grand appearance at the Woodward Avenue Dream Cruise Classic Car Show in the Detroit area last week. Looks beautiful, although perhaps a little light on the frosting?

Unfortunately for me, I missed feasting my eyes on this cupcake by just two days. Happening to be in the Detroit area last week to visit friends and family, we made our way to Dream Cruise on one of the “unofficial” cruising days, Thursday, and thus missed what could have been a life-changing moment for me. Instead, all I inhaled was a mass of car exhaust. I’m sure I would have been a much happier camper if I could have seen this behemoth in person. Apparently there was a cupcake eating contest affiliated with this event as well, where the winner ate 18 cupcakes in 8 minutes. Gag. Too much sweetness in too short a time. I have to wonder if the winner got a crazy sugar headache and crashed out twenty minutes later.

This Sunday marked the conclusion of the 157th annual Iowa State Fair, known to downscale gourmands far and wide as the annual pinnacle of American eating. From cupcakes to astronauts, if it exists, you can bet the folks at the Iowa State Fair can grow it to an obscene size, deep-fry it and eat it off a stick, or of course, sculpt it out of butter.

A classic. Look at the detailed carving in that butter udder. Masterful work.

9. Frozen S’more on a Stick

Mmmm…a new era for desserts on a stick. Genius.

Anyone else think there’s something really creepy about this photo?

Another creepy one! Who wants a rodent on top of their cake? And this was a blue ribbon winner! What did the losing cakes look like??

Oh right. This is what the losing cakes looked like. Can anyone even begin to explain what is going on here??? Are those jalapenos? Chocolate covered hot dogs? Deep fried garbage?

Next: Top 5 Food Finds at the Iowa State Fair

(Author’s note: this is my last cupcake post for a while; I’m being sent to India for a work assignment next week, and baking is not in the equation. Watch this space, however; there may very well appear some one-off features on the challenges and oddities of an expatriate trying to eat in the Asian subcontinent.)

Last week I received some sample packets of matcha from Matcha Source. Matcha is traditional Japanese green tea powder, and I’ve wanted to use it in cupcakes for awhile now, but its relatively pricey price in America has so far discouraged me. It’s not that I’m a tea snob; on the contrary, I enjoy a nice cuppa. Black teas provide a gentler morning “lift” as opposed to coffee’s caffeine bitch-slap, regular bagged green teas are excellent for detoxing, (Yamamotoyama’s genmai-cha is a personal favorite) and Mighty Leaf makes a nice camomille blend that doesn’t taste too much like soap.

Fun fact: herbal teas aren’t technically teas at all since most of them contain botanicals and aromatics and no real tea leaves.

Matcha, however, is something altogether different. Steamed and dried, green tea leaves are then stone ground over and over again until a fine, silky powder is produced. Since matcha is mixed directly with water and not steeped, you consume the tea leaf itself, which makes for a very heady, earthy, albeit bitter, brew.

There wasn’t even enough of Dr. Manhattan’s remains to bury after Ozymandias got through with him.

As for the cupcakes, if you take any lesson away from reading this today, it’s this: recipes are written down for a reason. What that reason is varies from cook to cook, but for the most part, it’s to provide a proven, documented legacy of culinary functionality for anyone who comes after that initial session in the kitchen. That said, I’m a person who likes to experiment with recipes, to tweak little things here and there, take something out and add something else, to make the dish my own and create my own legacy. There’s supposedly an unwritten rule among amateur cooks that states you can claim an established recipe as your own creation if you change at least three things about it, which has been the case for most of the cupcakes I’ve posted here during my tenure at ES.

But, as we all know, baking recipes are different than just mucking with a recipe for borscht or noodle soup or green bean casserole. Tweak something the wrong way, and you get a Friday Fuck Up that doesn’t care what day of the week it is.

Tang cupcakes with cherry Kool-Aid frosting. You heard me. Oh yeah, I went there.

It’s been summer officially here in California for a few weeks now, and like most seasons in This Great State, it’s peculiarly schizophrenic. Hundred-plus noonday temperatures one week, crisp and chilly overnights the next. They say you can get used to anything, but even the natives here still find time to bitch and moan about the weather instead of doing something about it, like moving. I guess I’m lucky in that I spent a large part of my childhood growing up in the Midwest, a region of the country notorious for its own extremes of climate: jungle-humid summers, savagely cruel winters, and even the springs and autumns were marred by cicada invasions and the odd freak tornado.

For foodies and other gourmand-types, we often mark the changing of the seasons by the availability of our favorite produce, the arrival of which also sometimes serves as a harbinger of things to come. For example, we know it’s spring when we see the first scrawny stalks of asparagus start to appear at the farmer’s market and more “locavore”-minded eateries; we also know that when this unfairly short asparagus season ends, it means that both summer and strawberries can’t be too far off.

Baking also has its own season, but it isn’t summer. Or is it? On one hand, what kind of masochist wants to hang around a hot kitchen on a hot day with the stupid oven on? Summer is for bikini sorbets, barefoot cocktails, and halter top fruit salads, not sweater cupcakes or flannel muffins. On the other hand, baking as an activity may be relegated to the comfort months, but baking as a trend has proven itself lately to be an all-weather sport.  In our post-postmodern world, it’s the end result that is often a more accurate expression of our labors; and if there’s anything that’s the antithesis of seasonal produce, but still representative of an American summer, it’s the powdered drink mix.