I can attest to the durability and sturdiness of cast iron. It was with a huge cast iron pan that I injured my shoulder last year, while tossing fingerling potatoes, sizzling hot from the 500-degree oven, during a particularly busy Lenten fish fry dinner service.  Still, from enameled cast iron to that nice, seasoned, Lodge pan, anything cast iron gets my vote.

And Lodge is the cast iron standard. If you don’t have a Lodge cast iron in your pan collection, go buy a Lodge.

Now, there is even a Lodge Cast Iron Cookbook, filled with recipes using most of their product line, which is more diverse than I had realized. They even have a corn-shaped cast iron pan in which they provide a recipe for corn bread. There’s also a section devoted to camp cooking, which I believe is an area of much needed improvement, based on my own camp dining experiences. It’s difficult to cook well over an open flame. Maybe next time I camp I will make an attempt at “bean hole cooking” which is detailed on page 186 of the cookbook,  in which you dig a hole in the ground, light a fire in it, and then place a dutch oven into the hole. Just make sure to cover the hole if you intend to drink several alcoholic beverages. 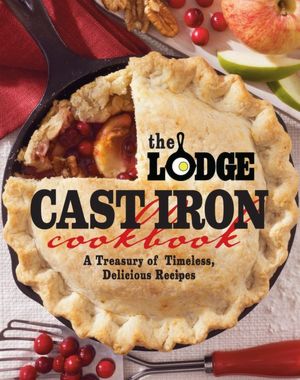 After looking through the Lodge Cast Iron cookbook for inspiration, I decided to cook some bone-in pork chops with the Lodge, like we had done at the last restaurant I worked. Luckily for me, I live above Fleisher’s Meats in Brooklyn, and one of the greatest things about living above a butcher shop is that you can buy meat in your pajamas.

To cook a delicious bone-in pork chop, first get your cast iron pan hot with some oil. Please remember to season your meat. Salt and pepper both sides. You want to caramelize the shit out of the meat. It’s a quick process of about 3 minutes on each side. Then put your chops, still in the pan, into a 400-degree oven for a few minutes until they are done to your liking. Pork does not have to be cooked all the way through. It’s not like chicken. Pork is delicious when pink whereas chicken is just unappetizing when pink. If you can’t tell doneness by poking your meat, pull the pork out at 140 F, let it rest for about 3 minutes, and it should end up at an ideal 145 F. You’re not making pork jerky, it should be juicy. Oh, and don’t buy gray pork please. Get some good-quality, well-raised meat that hasn’t been treated like a doormat.

Get some good meat. 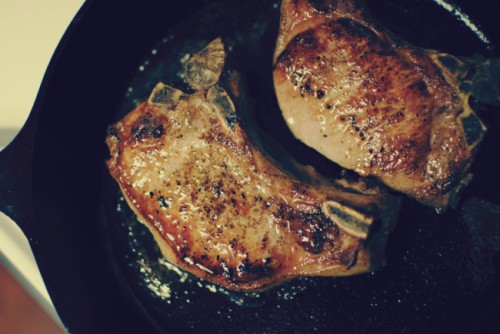 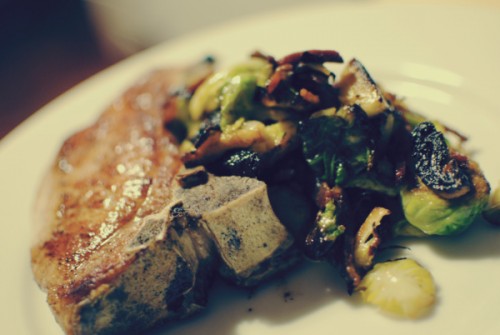 Serve with something delicious like Brussels sprouts, or, as the Lodge cookbook suggests, sauteed apples and onions. 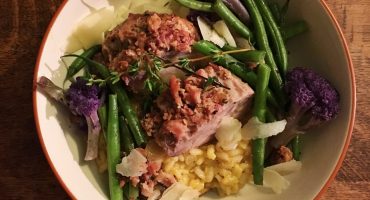