Spanakopita—spinach and cheese pie encased in phyllo dough—is our absolute favorite Greek dish. So for summer, we decided to create a potato salad inspired by spanakopita. To celebrate our yiayia’s famous pastry, we mixed the savory, cheesy filling with warm, garlicy roasted potatoes.  The addition of kalamata olives, sundried tomatoes and fresh dill adds color while keeping the Greek theme and further amplifying the tasty side.

While spanakopita is notoriously a labor-intensive dish, this potato salad is an easy, foolproof side for any summer BBQ.

This is What Brunch at Per Se Looks Like

Per Se may be the best restaurant in New York, but it’s also a food blogger’s nightmare: no photos allowed!?! ES Spy Sara Huneke discovered a secret: opt for their $200 brunch instead of dinner, and you’ll have enough natural light flowing in to surreptitiously take drool-worthy smartphone shots. 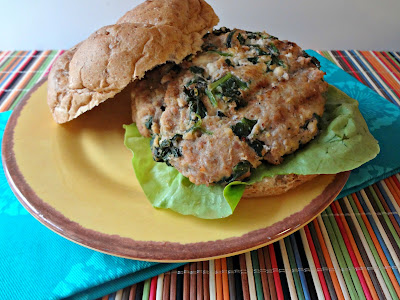 Well, it’s about that time to start firing up the grill for backyard barbeques. I love a good burger, but turkey burgers have a special place in my heart belly, also.
This turkey burger is a gem that I offer you to impress your friends and family. It is moist and flavorful with the lovely tang of feta. Like I always say, “Feta makes it betta’.”
If you aren’t crazy about ground turkey, ground chicken or beef would be good in this recipe, also. Or at least make the feta dip and dip some pita chips in it. Because you’re worth it.

The eggplant is a vegetable famous for its glossy, deep purple beauty. With its pleasantly spongy texture and mild flavor, it complements any ingredient. Looking at the tear-dropped gem, we got creative and brainstormed whether to take an Italian route incorporating mozzarella and basil, an Indian route with curry and raisins, or a Thai route with spicy basil and coconut milk. Ultimately, we opted for a Greek-inspired stack. The salty, briny feta paired perfectly with the mellow eggplant. To add some pop in taste and color, we layered sautéed spinach and tomato sauce.s

When we prepare food, we almost always have the same vision. This time around, we had slightly different approaches, so decided to each make our own layered stack. While the eggplant towers both follow the same recipe, they differ slightly in presentation.

When I was in high school, we had a tradition every Thursday night before Friday football games.  Myself and a few of my  friends would finish up with practice and show up sweaty and famished at my house. For some reason my Mom not only condoned this, but encouraged it by offering to feed the huddled masses. Dinner was always the same on these nights; grilled cheese with bacon, lettuce and tomato on wheat bread. This tradition has permanently seared in my palate the sweet, smoky combination of late-season tomatoes, gooey cheese, thick bacon and chewy homemade bread as the perfect complement to fall days and Friday night lights.

Grilled cheese is somewhat difficult to pull off at a tailgate and even harder to bring when you are invited somewhere. Can you imagine the reaction to showing up to watch a game with a tray of soggy, lukewarm BLT grilled cheeses? From then on you would definitely be the asshole in charge of bringing the soda and chips. Because of that, I  have tinkered with a homemade grilled cheese/BLT dip over the years. It hits all the right notes, though early in the process I realized that lettuce just wasn’t a good fit so I switched to the dip staple: spinach. This has been my go-to takealong for last-minute tailgates and game-watching.

Bennett, in a post-hangover primal urge, ordered a pepperoni and onion pizza. After flipping through a few cookbooks (Cook with Jamie, The Ginger Pig Meat Cookbook, Cook This Now) earlier that day, I wanted to be in the kitchen. But only for a second.

I washed some spinach and let it drain in a colander. I also threw in some flat-leaf parsley and—my latest experiment—carrot tops. I’ll stop there for a second. While buying said spinach, which was next to the carrots, at Truck Patch’s stand at the farmers market, there was a whole stack of carrot tops. Without carrots.

Apparently someone didn’t want the tops, so somehow they got chopped off and they were just sitting on the table. Looking pretty sad and lonely, actually.

That’s when I remembered this article touting the uses of vegetable parts usually discarded, like cauliflower leaves and apple cores. I asked what could be done with them and the lady said “juicing.” I didn’t have a juicer, but she gave them to me anyway. They tasted exactly like carrots. I know it’s not shocking, but it was kinda weird not to be eating an actual carrot and still tasting a carrot. Almost like smelling strawberries in wine and knowing strawberries never actually touched that drink. (I just watched Sideways, go with it.)

I finally get to the fuck-up after the jump.