Basil, Mozzarella and Tomato Panini – in a Waffle Iron! 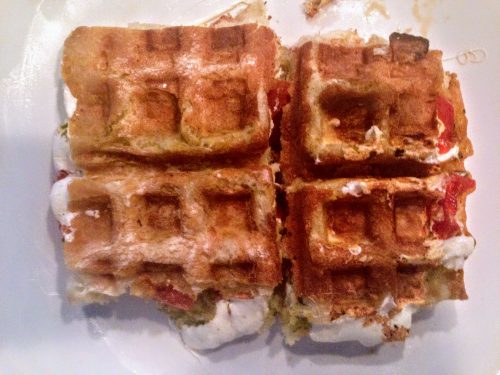 After making a list of crazy things to make in a waffle iron, I decided to “have at it” myself. But what to make? And how much of a mess do I want to make in a waffle iron? Lucky for me, I had a snow day to experiment. Every once in awhile, we make BMT paninis for lunch to satisfy some cravings. BMT meaning basil, tomato, and mozzarella. We make ours with pesto instead of basil. Anyway, I made the typical BMT sandwich and threw it in a waffle iron to make the panini.

The key to this recipe is the bread. A crusty bread is a must when it comes to shoving it into the waffle iron. If you pick a slice of bread that is soft, you will just end up with a big, gooey mess in the waffle iron. We used ciabatta. With the waffle iron bringing heat to both sides of the sandwich, there is no need to flip, and the hit gets to the cheese much quicker. Try it out for yourself! 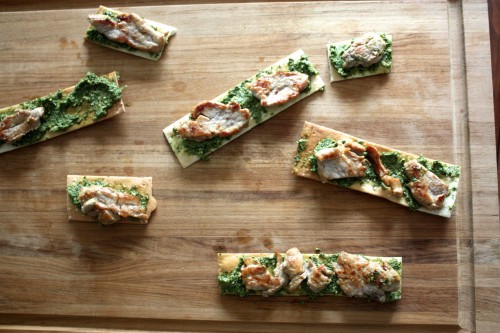 Woo-hoo for BBQ season! If there”s one thing we Simmer-ers love most about the weather getting warmer, it”s the opportunity to cook outdoors all day, every day, And as much as we like to do epic BBQ experiments, this time of year the weekends are filled with so many cookouts and picnics that sometimes we just don”t have the time to get super fancy-pants for every grill session.

When I had to make something super-quick for a BBQ/picnic party after work this week, I improvised with what I had on hand and came up with this winner, which took me about 20 minutes total.

I had one of these Smithfield Seasoned Pork Tenderloins in Teriyaki Marinade (I”ve previously cooked these up in the slow cooker and in the oven) but they can actually be quick and easy too, if you just slice up casino pa natet thin pieces of the pre-seasoned pork and throw it on the grill for a few minutes on each side.  Here”s what I did: 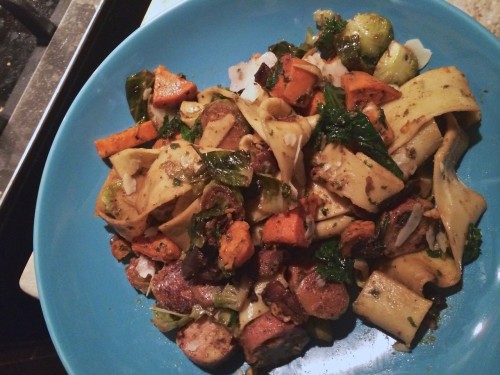 When I cook pasta at home, I want to make it count. Only high quality noodles, toppings and sauce full of delicious flavors and textures, and obviously we’re going to need plenty of cheese.

I don’t normally like to buy ready-made stuff (cheating!), but pasta is an exception – I’m not trying to make from-scratch noodles at home on a regular basis, ain’t got time for that life. Three Bridges recently sent us a package of fresh pasta to sample, and I was intrigued because they’re a convenience brand BUT also focused on health, quality, freshness AND eco-friendly food products, right up my alley. I couldn’t resist whipping up a spectacular carb-filled celebration of my favorite seasonal vegetables.

This Week at the Farmers Market: Summer Squash Pizza 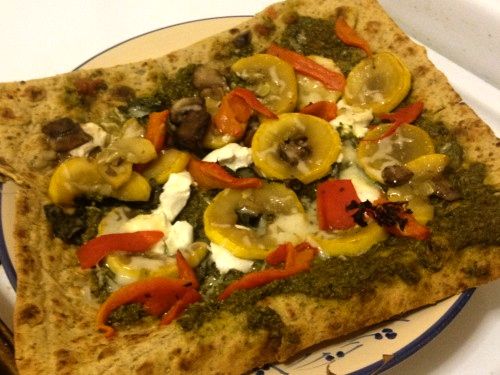 If you’ve ever tried growing your own summer squash then you understand how quickly they can multiply and become overwhelming. Even inventive cooks can grow weary of its abundance before the dog days of August, and they are now all over the farmers markets. But with mild flesh and edible skin, yellow squash is easy to use in a variety of ways: cooked or raw, grilled, steamed, sauteed or baked. When picking out your squash at the market avoid spongy, flabby or overgrown ones and choose ones with taut skin, about 8 inches long or less.

This is a perfect way to enjoy veggie “pizza” without a ton of calories. You can make this light, tasty meal in the toaster oven on hot days when you don’t want the added heat in the kitchen. You can also eat it cool, rolled up as a wrap.

Sandwiches in the City

New Yorkers are obnoxiously proud of our lunchtime options. We don’t do chains because we don’t have to. Not when you can find everything from banh mi hot dogs to Brussels sprouts sandwiches for under $10. That’s exactly why I’ve been so bothered by the rapid proliferation of Cosi, Pret a Manger and the like across Manhattan in recent years. Are New Yorkers really lunching at these places now? Sure, these semi-upscale sandwich chains are better than Subway or Quiznos, but I’d still take a Boar’s Head bodega roll any day of the week.

Recently entering the midtown sandwich contest and blowing the chains out of the water is City Sandwich, a Portuguese-style sandwich shop from chef Michael Guerrieri. Now, you foodies may be noting that there’s not really any such thing as a Portuguese-style sandwich. This is true. Like most refined Europeans, the Portuguese prefer to sit down and eat their meals with knives and forks. So Guerrieri, who was born in Naples, raised in New York and spent 13 years cooking in Lisbon, has taken traditional Portuguese meals and turned them into an array of newly-invented sandwiches.

The crispy bread is brought in twice daily from a Portuguese bakery in New Jersey; the insides scooped out to make room for fillings and to ensure the sandwiches aren’t too heavy. Each one is spread with high-quality olive oil and built using unique ingredients you’d be hard-pressed to find in any other sandwich shop in the world. For example, the Bench Girl, pictured above, contains alheira, a smoky, spicy sausage that was pioneered by Portuguese Jews during the Inquisition. In an effort not to stand out among their pork-eating compatriots, the Jews invented this chorizo-like link that is actually made from chicken, but looks enough like the real deal that no one could guess they weren’t dining on swine. Apparently, back in the day on the Iberian peninsula, not eating pork was enough to get you burned at the stake. Today, a little bit of pork has managed to sneak into most versions of alheira currently produced in Portugal, but it’s still a superbly rich and flavorful sausage that’s not quite like any other. It’s paired here with an omelet, grilled onions, spinach, and melted mozzarella, for a savory breakfast-y sandwich that is appropriate any time of day.

For a look at City Sandwich’s other inventive, Portuguese-influenced sandwich creations, keep reading after the jump.

And That’s How I Fell in Love With Almonds

Fuck pine nuts dude. Now I don’t normally spite shit just because it’s expensive. I will pay for nice cheeses, maybe a duck salami, homemade cream cheese spun with sun-dried tomatoes. But I just can’t get into footing the bill for pine nuts.

And I’m glad, because then I never would have fell in love with almonds.

It was Bennett’s turn to cook. We thought of this baked orzo dish with lots of vegetables from the market. And pesto. A thick pesto sauce blanketing every little noodle.

I was typing in the bedroom. But couldn’t resist checking in on Bennett. I spied him cutting a pepper, letting almonds dance on a dry pan. And it smelled wonderful. Like warmth and butter.

Modern Man played out of his Android and I quickly wiggled my neck around, pursing my lips, dancing from the shoulders up.

He slid the almonds from the pan and into the blender, grinding them into crumbs. Honestly, we could have tossed the crumbs with oil and have been set. But we put the whole package together with salt and pepper and cheese and basil.

We threw the extra crumbs in the freezer, which have since been blended with Swiss chard and Colman’s mustard for a slightly bitter pesto (pictured above as a spread for a sandwich of oven-dried tomatoes and patty pan sqaush) and then combined with Parmesean to top a baked tomato stuffed with Jersey corn, jalepeno and scallions.

And that’s how I fell in love with almonds.

Shooting for the Sun 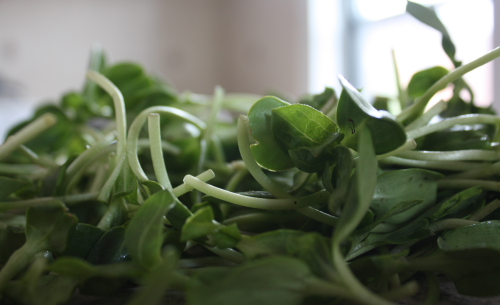 Back in the early days of ES, I once ranted about the trend of making every thing on earth into a pesto, thinking that the old-fashioned basil kind could not be beat. However, one of our first ever commenters, John James Anderson, set me right:

After living in Italy for over a year there are about half a dozen pestos out there for sale on the shelves of Roman grocers; all are defined by region. Pesto basically means something that is ground. So, anything can be made into a pesto. The walnut variety of which you wrote typically should be mixed with sun dried tomatoes, garlic and Parmesan cheese (piu olio, sale e nero, claro!). Others are made with olives, onions, spinach and ricotta. But, Pesto Genovese (above) will always be king.

OK, fine. I don’t really know anything. I just pretend to be a food snob. And now that we’ve had everything from arugula pesto to nettle pesto on the blog, I’m officially a convert — anything green is better ground up and mixed with cheese, nuts and extra virgin. So when I saw sunflower shoots at the far mar this weekend and bought them on impulse, I knew immediately what I was going to do.