Rise and shine, ESers! Feast your eyes on this: an insanely epic biscuits & gravy dish I discovered during Sunday brunch at Banger’s Sausage House & Beer Garden in Austin.

The menu describes it as a “house-made biscuit, milk gravy & your choice of housemade bacon or housemade breakfast sausage” but let’s be real, that bacon is clearly just two huge slabs of pork belly. And just look at that river of gravy. These people are NOT messing around with their breakfasts and next time you’re hungover in Central Texas, you now know where to go.

From Grains, to Beer, to…Sausage? 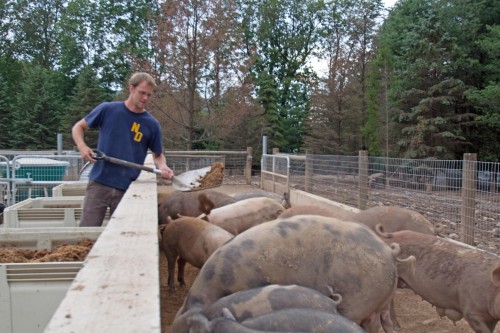 25 year-old Nolan Thevenet (yes—younger than most of us bums) decided that his time at Drexel University was done after drawing up so many plans for a farm that his sketchbooks were costing as much as his tuition (no exaggeration). Nolan called up his mom and told her that he was starting a farm on their 40+ acre property. IN THE WOODS. Nolan’s lineage is not one of farmers or shepherds, but he determined that he could learn the farming way through books, visits with other farmers, and, of course, Google. The result? A three-year-old livestock farm with over 60 goats, over 50 pigs, and over 50 chickens.  Oh, and AWESOME beer brats. What makes them so awesome is not just the fact that they are free range pigs (in the forest) but also that they are fed spent grains from Weyerbacher brewery. (Spent grains = leftover grains after the boil to make beer)