Well, it’s here, the day we’ve been waiting for all year: National Nachos Day. No, I’m just kidding—I’m talking about Election Day, of course! (But seriously, it actually is National Nachos Day as well, so maybe hit up your local Mexican restaurant after visiting the polls today.)

I know a lot of people like to make their decision by examining where the candidates stand on important issues such as the economy, civil rights, coolness factor, and international relations, but for our endorsement, Endless Simmer cuts through the crap to the only thing that matters: who eats it better?!

Round One: Ice Cream

Romney goes for a tall cone o’ soft serve, which is one of my favorite treats. (Seriously, every time we drive by a Dairy Queen on a road trip, I scream “DQ!!!” like a rabid six year old.) Obama, on the other hand, goes for a controversial choice: mint chocolate chip eaten with a spoon. I’m not kidding about the controversy; bloggers had a heyday  about Obama’s outrageous rebellion. (“If he wanted to eat with a spoon, he should have ordered ice cream in a cup!”) Well, guess what, haters: I also eat ice cream out of cones with a spoon. Sometimes my teeth are sensitive! I’m glad to see our sweet-toothed POTUS understands my struggles. 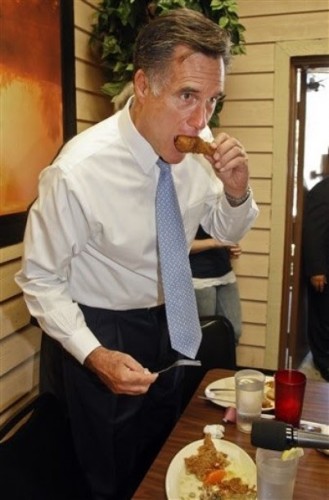 Well, it’s reassuring to know that both of our options aren’t afraid to grub down on some bird. Romney seems a bit… uh… glazed over during the whole thing, while Obama aggressively tears into his wing. What does this mean? It probably means nothing. Both of these political bros are just chowing down on some chicken, and while Romney looks perilously close to the mortal sin of sticking his fork into that drumstick, he doesn’t actually do it. 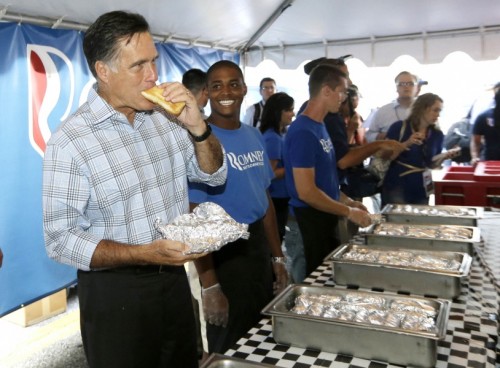 While I’d say Obama wins the mouth-wide-open portion of this competition, my beautiful Michelle looks less than pleased. I hope she realizes that everyone deserves a little cheat snack now and then, even if she is a major proponent of getting healthy. Then again, maybe she is just squinting into the sun, or maybe she is jealous of his mouthy prowess. Either way, that’s a super cute sundress, girl. Romney, though, is the one who really milks this photo op–he actually has a young, black guy in a campaign shirt, smiling right at him! Photographic evidence that he probably has at least one black voter. Good job, dude. 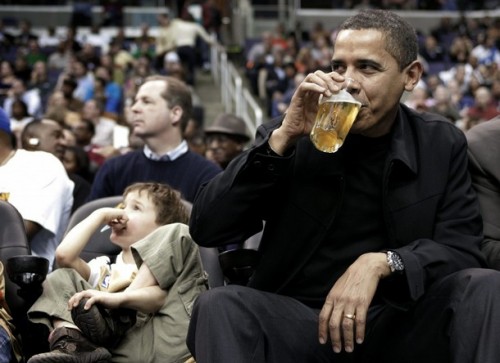 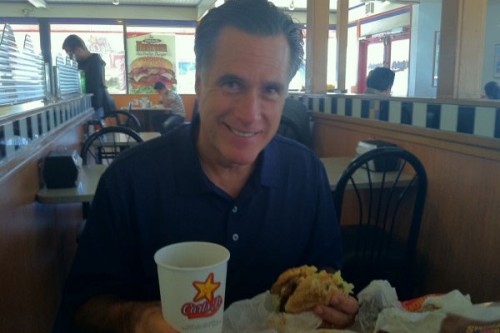 Some people whine that our POTUS shouldn’t imbibe, but whatever. For one thing, he’s at a basketball game. It’s basically mandated that you drink at sporting events. For another thing, drinking is cool and we all know it. Bottoms up, Obama. On the other hand, Romney drinks a MYSTERY BEVERAGE at Carl’s Jr. It’s a mystery because he’s a Mormon who doesn’t drink soda, coffee, or sweet, sweet alcohol. Everyone has freedom of religion and that is a wonderful thing, but at the same time, a fountain soda cup full of non-fountain soda is just kinda sad. That cup is probably full of… water? Decaf iced tea? Just plain chunks of ice? The world will never know. Womp womp.

Round Five: Wildcard Round 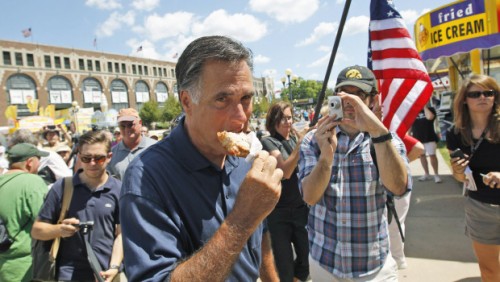 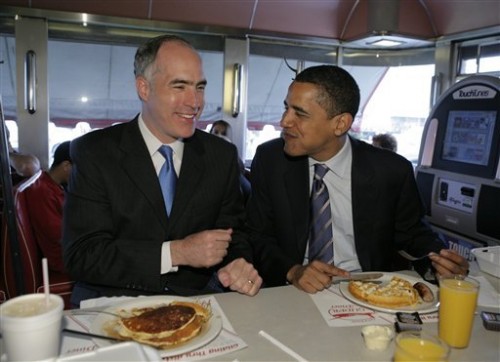 Romney gnaws on a giant stick of pork while overexcited fair attendees lustily snap his photo. Keep in mind, we are definitely not hating on state fair food, as it provides us with an astonishing amount of entertainment every year. Still, that pork stick doesn’t look as appetizing as Obama’s intimate breakfast. Just like another one of my most beloved American politicians, Leslie Knope, he loves great times with great friends, over a plate of great waffles. If that doesn’t warm your heart, I don’t know what will.

In the end, who should you vote for? Endless Simmer cannot tell you that, you must let your heart and stomach be your guide. We just hope that all of you out there vote today… and don’t forget to treat yourselves to some nachos afterwards. 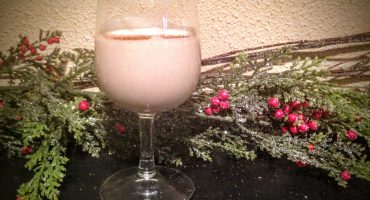