100 Ways to Use Beer in Food and Drinks #6: Chicken Carbonara

Another one down. I’ve faced the challenge yet again and for number 6 on my list of 100 ways to use beer in food and drinks, I declare victory on successfully using beer in chicken carbonara. Be impressed.

This weekend, we embraced craft brewing by using a bottle of Flying Fish Extra Pale Ale in a chicken carbonara recipe. I’ve already heard some Italians claim that beer just doesn’t work with Italian food. As I said earlier, I declare victory. Onward.

My Italian girlfriend knows the reasons behind the different kinds of pastas and what works best in what sauce, etc… As for me — I like the shapes and textures of some, and just don’t like others. Farfalle is my favorite, so we used that. If you think you know better — then do what you want. We used Barilla’s PLUS version of Farfalle — although with all this cream and booze you could use whole wheat pasta and nobody would notice. 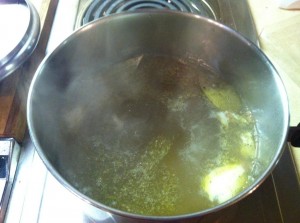 After the pasta, I’d have to say the next important aspect of the dish is the meat — the chicken! And don’t forget this is part of the sacred list, so beer is also important here. Before shredding the chicken, it was poached in a beer broth in order to keep it moist and give it a distinct flavor. The Flying Fish Extra Pale Ale is a good beer to use with chicken because of its light body and crisp, refreshing taste. It isn’t a very bitter beer, but has some fruity and citrus aromas that complement chicken and spices.

The Extra Pale Ale was used throughout the dish. Before mincing the garlic, it was infused with equal parts beer and olive oil. Where else could I put beer in pasta, you ask? Well, we cooked the pancetta in Extra Pale Ale and obviously it was pure goodness, but you know that already. And finally, some beer was poured straight into the sauce before it was cooked in with the pasta.

If you haven’t tried any of these beer-in-food recipes yet, try this one. Each of the ingredients in this recipe work well together to create a unique flavor that makes the carbonara so good. Again, you’re probably asking why “waste” a craft beer on the pasta dish. Well, if you are going to use Bud Light instead, you may as well just urinate in it.Using a quality brew really makes a difference taste-wise.

Again, the recipe below is just a suggestion — add/take away as much as you want according to your taste — that goes for the beer too. Just don’t take it out completely! Also, feel free to dip some bread in the juices of the beer and olive oil infused garlic. You’re welcome.

First, add the chicken broth, then fill the can with water and add that to the saucepan. Then, add 2/3 -3/4 cup of beer, according your your liking. Add your seasonings, two smashed cloves of garlic and the 2 bay leaves and bring to a boil. Once the beer broth is boiling and tastes to your liking, put in the chicken, take the liquid down to a simmer and cover for ten minutes. You can even take the pot off the burner — just check on the chicken and you may need to bring the heat up again. Then, shred the chicken!

Start cooking pancetta with a bit of beer coating the bottom of the pan, some olive oil, and the beer/olive oil infused and minced garlic. While the pancetta is cooking, put water on for the pasta and bring to a boil.

While waiting on the pancetta and water to boil, whisk the egg yolks, light cream, beer (again, use your judgement or the suggestion above) and add cheese. Increase amount of cheese as you increase the amount of beer. When the water is boiling, throw in your pasta and don’t forget about it!

Let the pancetta sit on low heat until your pasta is ready. As the pasta strains, throw the chicken into the pan with the pancetta and let it brown with the other ingredients. Now add the sauce, peas and pasta and make sure it is all mixed together and the peas are cooked. Finally, add the spinach last to keep it from wilting.  Once everything is mixed, put it in a serving dish and “grate” the lemon peel over the pasta (I was skeptical about the lemon, but it was worth it).

Serve with some good Italian bread and feel free to dip that in that beer/olive oil! Enjoy while drinking the beer you cooked it with and partake with friends!