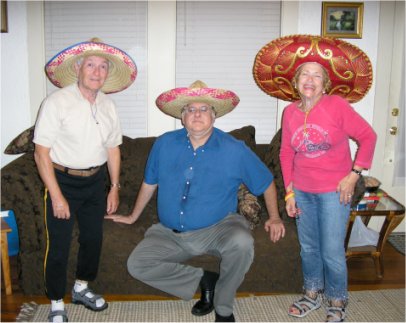 Building on PoM‘s outstanding post on Dos Gringos, tres gringos was the scene the other night when my dad and bro took me out for a genuine Mexican birthday.

Now, while much of this blog has focused on eating out in the District, this particular ES-er recently graduated from D.C. and moved back to New York, so expect to see some reviews of NYC destinations as well.

A tiny space with four tables, a counter and a TV always blaring soccer, Del Valle aces staples like steak fajitas and pork tacos, but really kicks it up a notch with chicken enchiladas covered in spicy chocolate mole sauce. They used to sell the mole sauce in take-out containers – which made any home-cooked Mexican meal 1,000 times more impressive – but unfortunately have grown too busy to cook enough mole for sale.

Equally mouth-watering are the Chile Rellenos – oversized poblano peppers breaded and stuffed with queso blanco and smothered in red salsa. (I’ve decided I want to try making these – any tips, readers?)

If you’re feeling really adventurous, the most intimidating dish is a giant bowl of seafood soup – piled to the brim with squid, crab legs, shrimp, mussels, and a few other unidentifiable but delicious sea objects. Chipotle this is not, but for some genuine Mexican, maybe the best you can do North of the border.