Christmas is around the corner. I know I’m counting down…yes…4 days of work left until break. Co-workers are coming in with their trays of Christmas cookies to share and we all poke around to see if our favorites are there and leave the lame ones to go stale. We spend hours upon hours creating tons of cookies to share with our friends and loved ones and there are always rejects left behind. What if tradition was thrown out the window and you could make any kind of Christmas cookies you wanted? Leave the plain butter cookies and the raisins and fruit filled cookies behind this year and try out our top ten Christmas cookies. Enjoy…

These are so easy and so tasty. You can through them in your Christmas tin and all of the sudden, these will be all your friends are talking about. You can make them in dark, milk, or white chocolate and can even add coloring to suit your season of choice. 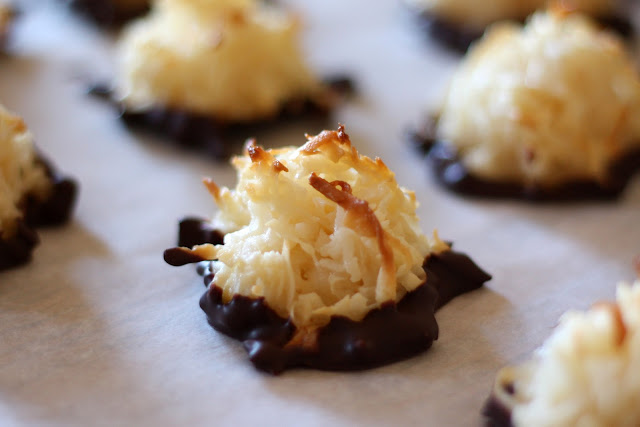 My fiance makes bakery-quality macaroons. Seriously – best I ever had. But these take a very close second. Macaroons are not often thought of as a Christmas cookie, but they are too damn good not take a spot on the dessert table after Christmas dinner!

RECIPE: Barefeet in the Kitchen

Red Velvet is not necessarily a “Christmas Seasonal,” but I think these will easily earn a place in the cookie tin. Especially with that cream cheese filling… 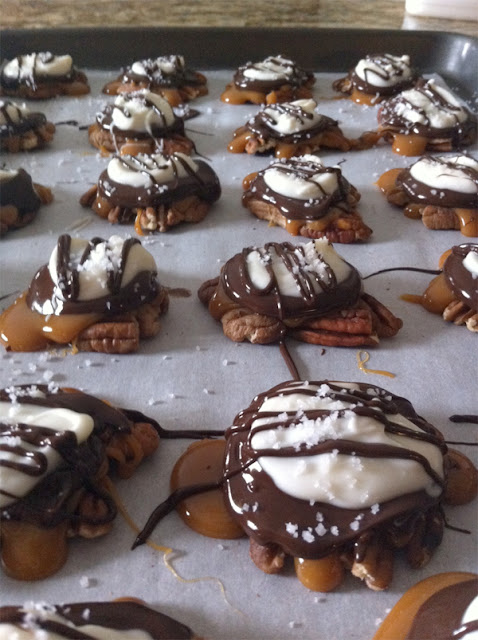 Okay…they are not technically cookies. But they look so easy to make and even easier to eat.

My very good friend and longtime roommate, Dayna, and I have a special wintertime tradition. Every single year, the first time it snows, we set aside the evening to drink a bunch of wine and make homemade truffled macaroni and cheese. It all started five years ago when I found this recipe online and we decided to whip it up on an especially chilly Seattle night—coincidentally, the first night it ended up dumping snow all over the city. It was such a perfect comfort dinner, we vowed that we would cook it together at the first snow of every winter. And we’ve kept our promise every single year!

We ran into an issue this winter, though. I moved to Austin in March 2012, and Dayna ended up moving down here (into my house! Roomies again!) Around a month ago, we realized we had made a grave mistake: there’s almost never any snow in central Texas! Well, obviously we decided that we would have to break the vow and make the mac any damn time we pleased down here. Our First Snow Mac & Cheese became White Winter Mac & Cheese (white because it refers to the snow of years past, and also because this recipe uses all white cheeses : chèvre, white cheddar, gruyere, and parmigiano reggiano).

I can’t emphasize this enough: this macaroni and cheese is amazing. It’s the best homemade mac & cheese recipe we have ever used. I originally found it on the lovely What We’re Eating, but over the years Dayna and I have tweaked it to our preferences. Feel free to do the same —amount of truffle oil, spice, types of mushrooms, and type of pasta can all be modified to your liking.

As much as I love holiday cookies and confections, I’m just not much of a baker. I’m impatient and imprecise, two things that are not beneficial for a cook who wants to excel in the world of baked goods. Luckily for me, there are a whole lot of treats out there that look and taste fancy, but don’t even require pre-heating an oven.

Peanut butter balls were always a favorite of mine as a kid, and these no-bake truffles are a fancy version, thanks to the addition of one of my all-time favorite dessert ingredients, fleur de sel. It’s an amazing compliment to almost any sweet flavor, plus it adds a satisfying crunch. Combine this sophisticated ingredient with the no-brainer combo of chocolate and peanut butter, and you have a guaranteed winner for your next holiday party! Not to mention that the rainbow nonpareils I added are just so festive and cute. Yeah yeah, I’m one of those people who thinks rainbow sprinkles make everything infinitely better. I can’t help myself.

If you haven’t noticed, next to beer, I favor sweets.  I’d go so far as to say if it was an ideal world, I’d subscribe to Elf’s main food groups. Maybe not that far…but pretty close. Oreos are one of those foods that integrate sweet creaminess and crunchy chocolate to a different level. I’m sure there are Oreo purists out there who will only eat it one way—but for the adventurers among us, here are ten more ways to eat the number 1 sandwich cookie in America:

Cookie-on-cookie action! Some cookies you need to eat warm or wait until they get crispy. It seems like this one is enjoyable no matter when you chomp down on it. I’d still go for right out of the oven. Really—what’s better than the warm insides of a cookie?

Some people feel overwhelmed by a large piece of cheesecake. At least this gives you the perception that you are controlling your portions. Until you have another…and another..and…

This is What Brunch at Per Se Looks Like

Per Se may be the best restaurant in New York, but it’s also a food blogger’s nightmare: no photos allowed!?! ES Spy Sara Huneke discovered a secret: opt for their $200 brunch instead of dinner, and you’ll have enough natural light flowing in to surreptitiously take drool-worthy smartphone shots.

How do you eat your Oreos? Do you twist? Dunk? Twist, then stack, then dunk? How about crushed and pulverized into a small ball and then covered in chocolate? I never thought an Oreo could get much better until  I visited my girlfriend’s family for the holiday and discovered “Oreo Balls.”  These creamy spheres are made of Oreos crushed up and mixed with cream cheese, then covered in chocolate. They are so good, I’ve been conditioned to salivate just from talking about them.

Fast forward over a year and a half, and my sister’s graduation is upon us. In order to pitch in, I volunteered to make Oreo Balls with a twist—a peanut butter twist. Admit it:  you put some peanut butter on your Oreos occasionally. So I bring to you “stick to the roof of your mouth” Peanut Butter Oreo Truffles.

At some point last year I came across a recipe for ice cream truffles. It seemed easy enough. You scoop the ice cream, flash freeze the scoops, coat them in melted chocolate, freeze a little while longer, then indulge. So I grabbed a pint of  Häagen-Dazs vanilla bean ice cream out of the freezer and happily started away.

Good lord, it was a holy disaster. I’m pretty sure it ended with everything thrown unceremoniously in the garbage, quickly followed by the crack of a beer. But since I started making my own ice cream, my mind has often wandered back to that terrible day, and made me wonder exactly what went wrong. I started researching and I determined it was three things:

1) When the ice cream scoops started to melt I kept going instead of popping them back into the freezer.

2) When the temperature of the chocolate dropped and quit adhering easily to the ice cream I did not heat it up again.

3) Dipping the ice cream with my hands was messy and slow, increasing the speed of melted ice cream and cooling chocolate.

So I decided to give it another whirl, and this time the results were pretty fantastic…