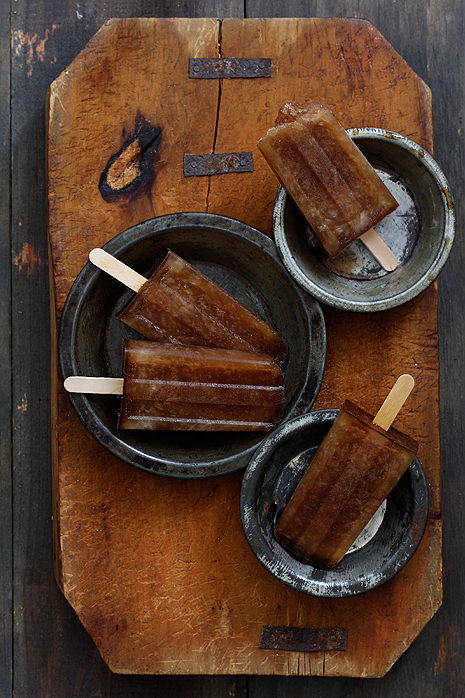 We Don’t Have Coke 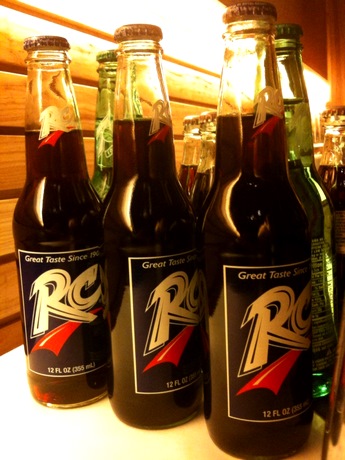 I am never early for anything in my life. And I’m barely ever on time. Late. Late. Late. So when I arrived at my friend Whitney’s bridal shower at exactly 11 am—showered, hung over, and pleased with my sexy parking spot with 51 minutes already stacked in the meter—I was of course, very proud of myself. Then I tried to open the door and it was locked. Yea, Farmers & Fishers wasn’t open. Panic. The manager came over and unlocked the door.

Me: <Took a step back, swinging head from side to side, am I at the right restaurant? What day is it? Am I that hung over? Fuck.> “Um.”

Manager: “Are you here for the bridal shower.”

Manager: “It doesn’t start until 12. But you’re welcome to sit at the bar and wait.”

Me: <Are you FUCKING KIDDING ME?!?! The bar! I can’t even look at alcohol. Kill me.> Oh man. I’m never early for anything. Thanks. And where can I get some change for my meter?”

After feeding the meter, I play on my iPhone for an hour (at the seat next to the host stand), mostly flipping through pictures of magnificent dresses on the Style.com app. When we get in the private room I’m offered wine. Instead I ask for a Coke.

Top 10 New Things to Put in Your Drink

We’ve certainly never been against drinking here at ES — it just traditionally takes a back seat to eating. However, in the last year we’ve found ourselves getting more and more excited about cocktails — because every time we go out we discover our favorite ingredients have migrated from the plate to the glass. From fruits and vegetables to spices and more, here are our top 10 favorite new things to mix in our drinks. 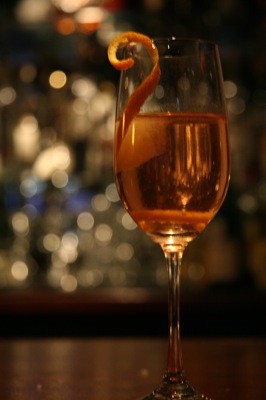 A saffron ice cube anchors the Venetian, one of several new food-inspired cocktails at Tulio in Seattle.

Not just for paella anymore, the Spanish spice has started showing up in cocktail glasses, too. Saffron Restaurant and Lounge in Minneapolis has mixed the pricier-than-gold flakes into saffron-mango mojitos, saffron-blood orange martinis, and their current offering, the gin-based Saffron Rose. Tulio, an Italian restaurant in Seattle, recently introduced The Venetian — a vodka cocktail poured over an orange-y saffron ice cube. For those experimenting at home, the folks over at Video Jug have a video on how to mix a saffron vodka martini. (Tulio photo: Evan Johnson) 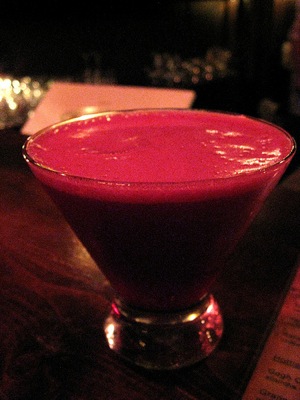 It’s hard to make a drink look more dramatic than when filled up with bright red beet juice, as in the beet sangria at New York’s Tailor or the Beetnik, a vodka-ginger-beet concoction served at Crested Butte, Colorado’s Dogwood Cocktail Cabin. Meanwhile, the gals at The Humble Kitchen have a recipe for their own tequila-based Beetnik. (Dogwood photo: eenwall) 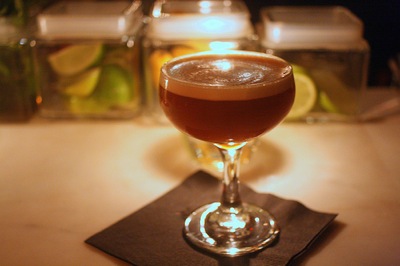 Mole bitters liven up the Palermo Gentleman at Death + Co. in New York.

Mexico’s spicy-sweet chocolate treat is making the surprising transition from tamales to cocktails via Bittermens Bitters newest product, Xocolatl Mole Bitters. A neat way to add quite a substantial kick to any drink, the mole bitters are showing up in new cocktails like the tequila-based Chipilo at Brooklyn’s Buttermilk Channel and several options at Manhattan’s Death + Co. (Photo: Vidiot) 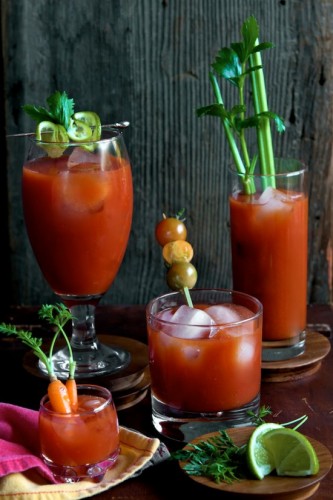 Every Top Chef contestant’s favorite secret ingredient can save a cocktail menu too, as in “El Scorcho,” a fiery mix of habanero infused vodka, sriracha, and jalapeno foam at Bend, Oregon’s Blacksmith restaurant. The sauce also makes a great replacement for Tabasco in bloody Marys — the blog White on Rice Couple has a great recipe, and if you want to get super-serious, check out their instructions on how to make sriracha from scratch. (Photo: White on Rice Couple) 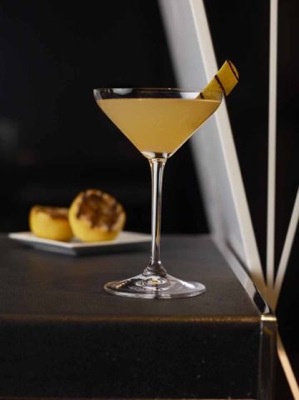 Another ingredient Chinese chefs may be shocked to discover in American cocktails, C5S is showing up both as a garnish, as in the Fortune Teller drink served at the Surrey Hotel‘s new Bar Pleiades in New York, and as the basis of a drink, such as Imbibe magazine’s Five-Spice Fizz. (Photo: Bar Pleiades)

Next: Top 5 New Things to Put in Your Drink

Fuck. So I’m back at work now. But at least I have these so-so photos from my iPhone to remember my looooong road trip from Atlanta to Hartsville to Nashville to Knoxville to Kingsport and back to DC. Let me walk you through my trip, via food, of course. 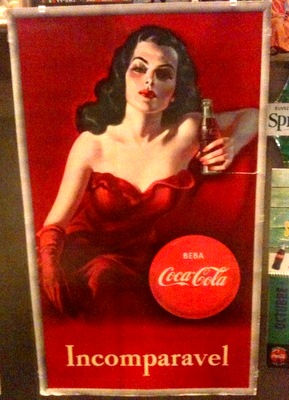 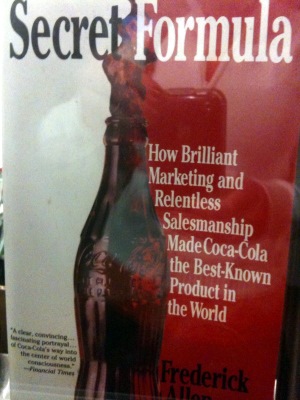 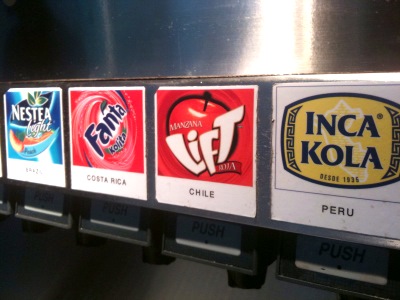 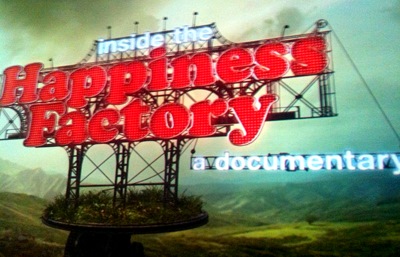 I learned a few things. Sex in different language sells. Coke’s secret formula has nothing to do with taste. Chile’s Lift is the best soft drink in South America. I paid $45 for 80P, 80P’s Mom and me to be brainwashed into drinking Coke for the rest of our lives. And it was worth it. 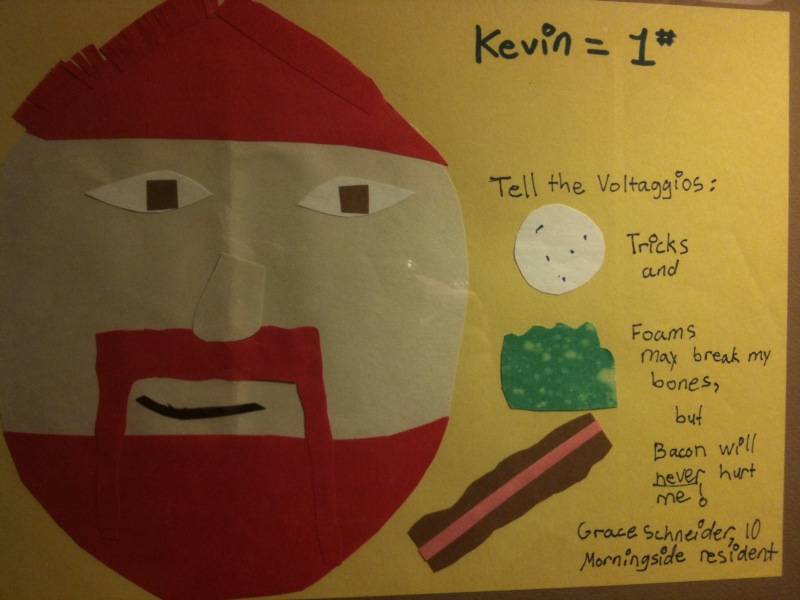 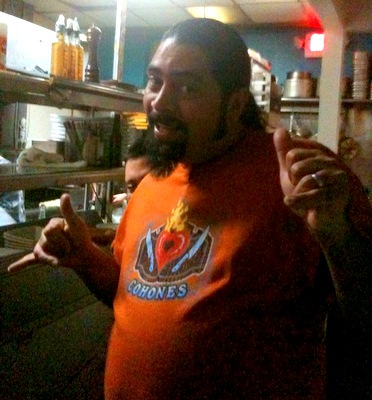 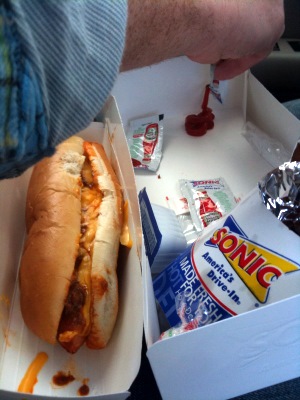 Ate Sonic for the first time. (Somewhere off the highway in Monteagle, Tennessee)

Don’t worry. I didn’t eat that enormous chili cheese dog pictured above (80 did!). I try to avoid meat and fast food. Shockingly, though, the mozzarella sticks were awesome. And the black and white shake, even better. Actually, get this.

We all know what a black and white shake is, right? So I wake up drunk on New Years Day, giggle my ass off for an hour, start to feel crappy, head to a diner and try to order a milkshake on my way out. And my fucking server looks at me like I’m insane. She took a triple take. And she goes, “Um, like put them on top of each other?”

What the fuck? What would that even mean? I clearly did not order a milkshake from that establishment.

The Top 10 Drinks Only America Could Have Invented

Independence Day 2008 inspired Endless Simmer’s most popular all-time post: The Top 10 Foods Only America Could Have Invented. So by popular demand (actually, by DAD GANSIE’s year-old suggestion), we’ve returned with a list of 10 ridiculous, patriotic ways to wash down all those corn dogs and buffalo wings. Don’t head out to the BBQs this 4th of July weekend without first consulting  The Top 10 Drinks Only America Could Have Invented: 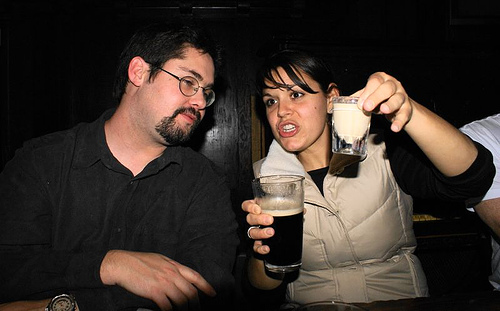 What? You thought this one was invented in Ireland? Yeah, by a leprechaun who needed something to pour over his Lucky Charms. In fact, this often-spilled, rather insensitive homage to the Emerald Isle’s Troubles was first concocted at Wilson’s Saloon in St. Norwich, Connecticut on St. Patrick’s Day, 1979. Only our most industrious country could produce minds bright enough to think “Hey, I can get drunk twice as fast if I just drop my shot right into my beer!” For the uninformed, a Car Bomb is equal parts Jameson Whiskey and Bailey’s Irish Cream, poured into a shot glass. Then you drop the shot into a pint of Guinness and chug the whole thing. Brilliant!

Honorable mentions: Sake bomb (pretty sure they don’t do this in Tokyo), and the Russian Boilermaker (surprise — not from Moscow). 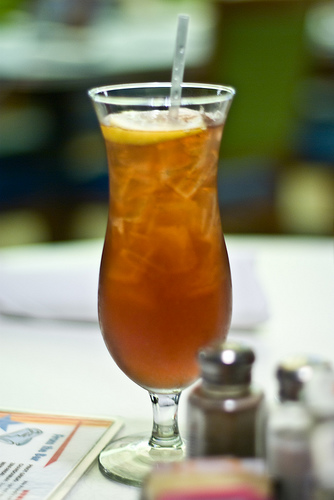 Looks so deceptively refreshing, doesn’t it? Only the most ridiculous place in all of America could loan its name to a drink that basically involves pouring everything behind the bar into one glass. For the record, a traditional Long Island is made from vodka, gin, tequila, rum, triple sec, sour mix and just a splash of cola. It tastes surprisingly un-revolting and (less surprisingly) makes you do some pretty stupid things after drinking it. 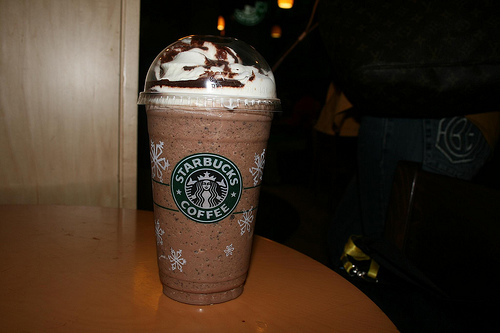 It’s not dessert! It’s coffee! Riiiiight. Only Starbucks could convince the skinny jean wearing, yogalates practicing, yuppie women of America that it’s OK to buy a drink that has more calories than a bucket of lard. But if it’s served in a cup, it doesn’t count as food.

(Photo: Shiok or Not) 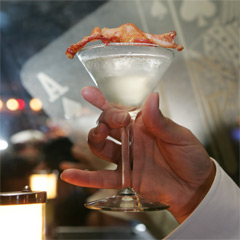 If there’s one thing we Yanks do well, it’s obsession. And anyone who’s every met one of us can tell you there are two things we can’t stop talking about: getting effed up, and bacon. So it was only a matter of time before we combined our two loves into one outrageous, trend-ending drink. The bacontini, now appearing on every blog, and soon enough, every bar across the USA.

But what to do the morning after you wake up and realize you’ve consumed nine shots of vodka and half-a-pound of bacon? Obviously, that’s when you switch over to exercise beer. The latest trend in American brews is super-low calorie beers like MGD 64, Select 55, and Michelob Ultra, which is my favorite because the ads for it actually show people drinking beer and then exercising. Finally, a way to get wasted every night and still lose weight, because you wouldn’t want to do something as drastic as, say, drink a little less beer.

Next: Top 5 Drinks Only America Could Have Invented