The bar includes a list of suggested hand crafted cocktails that vary by season. I had a mulled watermelon and white whiskey cocktail, a sweet rum martini, and a strawberry basil lemonade cocktail with vodka. Each cocktail is made with fresh ingredients and the bartenders (often the head distiller and VP of marketing) take their time to make sure each cocktail is quality. While my favorite spirit at the still works was the whiskey, my favorite cocktail was the vodka strawberry-basil lemonade. The basil was a refreshing compliment to the strawberry.  Randy (the VP of marketing) says that they are switching over to fall cocktails in the coming month. Also coming soon is the release of their barrel aged whiskey.

When it comes to whiskey, Manatawny Still Works is currently only offering white whiskey. White whiskey comes directly from the stills without aging. The flavor of the white whiskey is a bit more basic and very smooth. It makes a good mixer for just about any cocktail. White whiskey has the profile of sweet malt flavors, the taste of alcohol, and a warming feeling going down. The benefit of white whiskey is that it really can go well with anything. Since Manatawny has only been open for a matter of months, this is the only whiskey they are providing until the barrels are ready. They plan on continuing to sell the white whiskey even when the barrel aged whiskey is ready. It is popular especially with the cocktails. 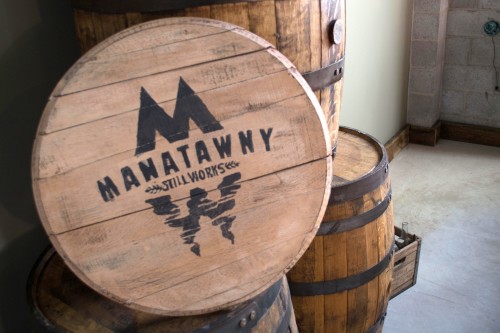 The still works offers a complementary tasting of each spirit at the end of a very informative and in depth tour, along with a complementary glass. I asked the head distiller what a “novice” whiskey drinker needs to know about tasting whiskey. Beer and wine snobs tout different glassware and tasting techniques when tasting their beverage of choice – is tasting similar for whiskey? The head distiller (Max) said that it depends on who you ask. His particular philosophy is: “drink it however you want.” There’s no prescribed way. While some like it on the rocks, others like it straight. Even others need to mix it with coke or ginger ale – then have it that way. I’m sure other distillers may tell you not to waste a high quality whiskey with a mixer or even ice, but the most important thing to Manatawny Still Works is that you enjoy it. However you want it – you’re welcome to drink it that way at Manatawny Still Works (within reason).

Generally speaking, whiskey is beer without the hops and carbonation. Whiskey is made from many of the grains used to create beer. Since one of the main investors in the distillery is also an exec. at Sly Fox, the distiller creates the recipe and sends it over to the brewery to create wash. You may be asking – what the hell is this “wash” you speak of? Wash is the whiskey version of wort. Still not there? Wash is made when grains of various types (wheat, rye, oats, barley, etc) are boiled and then drained. The end result is a sweet syrup-like substance that is called wort when it makes beer and wash when it makes whiskey. Once Sly Fox creates the wash in their German-engineered brew house, they send it across the street to the distillery. When asked if they have used any of the Sly Fox recipes to make whiskey, Max, the distiller explained that they haven’t yet…but there are talks to create a 113 IPA whiskey. YUM.

Max started his career at Sly Fox after earning his degree in Chemical Engineering at Penn State and going to brew school. After being a brewer at both Victory and Sly Fox, he was approached to be the distiller for Manatawny Still Works. Obviously, there is a chemistry to the making of whiskey. The wash is fermented with yeast, and then starts in one still, boils at 173 degrees F, separating the ethanol from the water. The ethanol moves to the top of the first still and trickles down to the bottom of the next still as “low wines.” In the next still, the low wines are again heated to 173 degrees. This time, cuts are made to first remove the heads and then the tails. Cuts are made depending on what kind of whiskey is created. White whiskey contains more heads, while whiskey to be barreled contains more heads and tails. The end product is finally whiskey, which sits in the reserve. White whiskey can go straight to production. 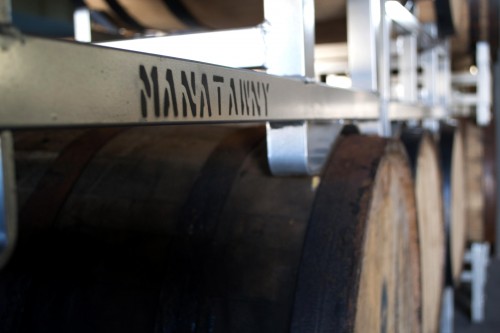 Barrel aged whiskey takes time to really sit and acquire the complicated flavors that we enjoy. The barrels are charred inside, which not only filters the whiskey, but also dissolves wood sugars that add complexities to the whiskey. Other than having barrels, the key to barrel aging whiskey is swings in temperature. The whiskey needs to be aged in a climate that allows for the whiskey to go in and out of the wood, absorbing different characteristics in every temperature swing.

While Max gave a great breakdown in the science of distilling, he also explained that the whole point of craft spirits is the personal touch. Every cut made is dependent on the flavor and the smell of what’s being boiled. The whiskey is truly crafted differently every time according to the complexity desired. Craft also means that it is created from beginning to end. Unfortunately, many larger distilleries are starting off with a whiskey produced by a large factory and is then re-distilled. Craft begins with quality ingredients and ends with a quality product.

If you’re in Philly or the ‘burbs – check Manatawny Still Works out. If not, find a craft distillery near you and check them out.