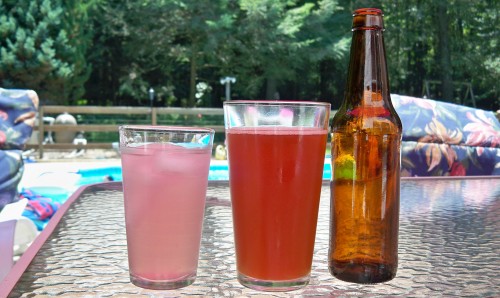 Independence Day has come and gone, and my mind continues to believe that the weekend flew by and we’re back at the beginning of the week. Quite the troubles… But fear not, the weekend is almost here again, and this time it’s a true weekend. And I have a drink for those of you who enjoy a sweet summertime beverage.

On the fourth, I decided to try out a drink on my list. I’ve had summer shandys made from actual breweries, but I wanted to make my own with homebrew. For the sweet half, all I had available was pink lemonade. My dad cringed as I explained to him what I was drinking. I was also skeptical, but the summer shandy I made was indeed refreshing for a hot day.

The beer Scrooges out there are scowling and saying something like “this guy is ruining beer.” To you I say, stop reading and go sniff your own flatulence. I thought the Dark IPA had a few similar qualities to an iced tea and the bitterness and malty flavor would go well with lemonade. It did. This isn’t something I’d have all the time, but when it’s a billion degrees out and you need a refreshing drink—it hits the spot while giving the boost of alcohol that we all enjoy.

Drink and be merry.

As always, make it your own—use different beers, different lemonades (maybe a raspberry lemonade with a wheat beer?)

And here’s my homebrew recipe for a  Dark IPA:

More: 100 Ways to Use Beer in Food and Drink