Who is the Eater of the Year?

Each year, Endless Simmer asks our loyal readers to vote on which person deserves the coveted title Eater of the Year. Past winners include Anthony Bourdain, Hezbollah Tofu, This is Why You’re Fat and Ruth Bourdain. So who made the biggest splash in the food world in 2011? The nominees are…

Maybe it didn’t work out in the end, but you have to admit, there’s something admirable about a man who isn’t afraid to say that running the nation’s 36th best pizza chain qualifies you to run for president. In fact, there isn’t much at all Herman Cain is afraid to say. In a world where presidential politicians deep-throat corn dogs in public and then retreat to their campaign bus for lobster thermidor, it was refreshing to have an honest eater in the race, at least for awhile. Herman Cain wasn’t afraid to sing about his love for crappy fast food, or to declare that only sissy men put vegetables on their pizza. He wasn’t afraid to eat chicken wings win Michele Bachmann, or to propse that poor people don’t need food stamps because they can just buy used food. How is this man not already eater-in-chief? Just hope he never asks you to dinner. (Photo: Broward Palm Beach New Times)

We can all acknowledge that the Food Network is pure shite nowadays, and there hasn’t been a food show worth watching since Cookin’ with Coolio. What the teevee execs don’t seem to get is that Americans don’t want 30 minute meals or cutesy casserole recipes. We want WORLD RECORD BREAKING FOOD.

Enter Epic Meal Time, the web TV show that ate all of the other web TV shows and then burped them up. Fancy an 84-egg sandwich? Meatloaf made out of McDonald’s? A Christmas tree crafted from bacon? EMT’s outrageous creations make state fair food look like a tea party hosted by Gwyneth Paltrow, and we just can’t look away. The ultra-American eaters dirty little secret? They’re Canadian.

When Julia Child said she was going to use television to teach Americans how to cook French cuisine properly, people laughed at her, but she became a foodie legend. When Julie Powell said she was going to cook every recipe in Julia Child’s Mastering the Art of French Cooking and record it all on something called a weblog, people just thought she was weird, but she became a blog-to-book-to-big-screen phenomenon. When college student Lawrence Dai decided he was going to watch Julie & Julia every day for a year, people immediately realized he was a genius. Yes, the Lawrence/Julie & Julia Project had all the hallmarks of a jokey web project that wouldn’t last more than 15 minutes, but Lawrence actually did it, watching J&J a full 365 times, and firmly proving that online journalism does indeed have a purpose.

We can’t remember exactly why this 17-year-old sexpot is famous; whether she’s an actress, singer, model or (more likely) just a professional famous person. But we sure are glad she tells us about every meal she eats via her 78,000-follower Twitter feed:

Preparing the most pleasant plate of pasta in absolutely nothing but my plush peek ‘a boo panties! Mmm… it tastes like perfection! 😉 XOs

Tenderly trembling my tantalizing tongue up – down – & all around the sugarcoated candy-cane of Christmas! XOs

My dangerously desirous hunger is sweetly appetizing for a hot soppy cream-cone that fluently overflows w/nothing but ssslippery excitement!

In the kitchen whipping up some syrupy splits before bouncing into bed for a sweet & finger-licking night! Yummm! ;-x

Wow. Has alliteration ever been so attractive? Are we going to be added to some kind of federal watch list for navigating to this twitter feed? Does this Courtney person have a ghost tweeter, and if so, has any writer ever had a more embarrassing job? And why hasn’t any Hollywood genius teamed Courtney up with Kendra Wilkinson and given them their own soft core cooking show yet? Guaranteed hit. 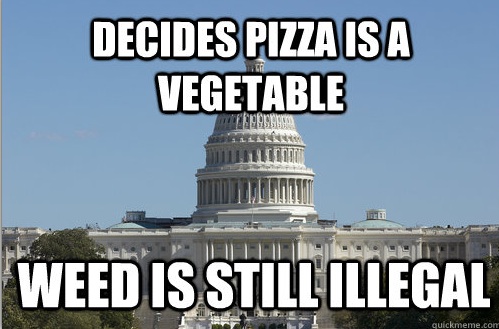 Right now in America, there is a dangerous cabal of communist jihadist hippies who are intent on prying the freedom fries right out of your children’s innocent little fingers and force-feeding them copious servings of whole grains and leafy greens instead. Fortunately, we still have a government here that stands for something, and the U.S. Congress is not going to just sit there and let these lunchtime intruders replace little Jimmy and Suzy’s hash browns with moldy old spinach leaves. This is America, goddammit, and there’s a reason why Herman Cain doesn’t put vegetables on his pizza. Because pizza is a vegetable. (Photo: Quickmeme)