And The Bible Told Me So

I’m just a tiny bit competitive. If BS is making asparagus soup, gansie must make some asparagus soup. Plus, it was my idea (see comments) in the first place.

So please, I welcome you on my asparagus soup making journey. It was a shit show.

Okay, so blah, blah, blah I don’t follow recipes. I made my own asparagus stock, according to Martha, and then sorta followed the BS endorsed recipe. Well, except for a few KEY ingredients.

The soup called for heavy cream and lemon. Like an ass, I thought I could sub yogurt for that combo: the yogurt could add a creaminess (heavy cream) and tartness (lemon.) Well, I made a boatload of soup and I guess the amount of yogurt I added in no way enhanced the flavor, nor the texture.

So then I added curry powder. And then ginger. And no luck. Still was fairly unflavorful. I think I used too much onion in comparison to the asparagus. I was PISTED. I mean, what asshole fucks up soup.

I checked out my fridge – longing to add depth to this vat of green liquid. I spotted red wine. An acid was desperately needed. But when I called out this almost revelation, the couch-dwelling 80P negged the idea. But then he suggested I consult the bible. The Flavor Bible, that is. It recommended red wine vinegar. I added a scant tablespoon and it automatically perked up the soup. I served it, but still lamented about its unsuccess. 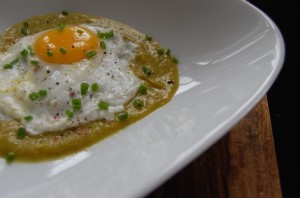 Q: What the fuck to do with a shit ton of leftovers?

The next morning I poured some of the leftovers into a tiny pot. And let it reduce. And thicken. And reduce and reduce and reduce. Almost until it was a quarter of what it was. At this point the soup evolved into a sauce. A sauce just quite thick enough to handle an egg.

So that’s what I did. I fried an egg in a separate pan and then topped a sauced-plate with the egg and scooped everything up with some market whole wheat bread.

Yes, there’s still this asparagus monster taking up plenty of prime tupperware space in my fridge. I revisit my Day 2 revolution and continue the reduction process. But this time, I aimed for a stew instead of a soup. Or something stew like. Actually, I’ve learned it’s more like a chowder, but I’ll get to that in another, well deserved post (thanks, Jackson 20).

I cut up two skin-on potatoes and began a poaching (?) process in the soup. This symbiotic relationship allowed for both the soup to thicken and the potatoes to cook. For more flavor, I added in additional curry powder, cumin and ginger. When the potatoes were nearly fork-piercingly ready, I added in bites of white fish (some generic fish, can’t exactly remember – bad blogger!) for just a few more minutes. I let a Jose Andres recipe guide me.

And that, my friends, is the unglorified version of an asparagus soup evolution. Thank you for your time. I look forward to hearing from you.